UK air traffic fell to its lowest level for 25 years in 2020: Passenger numbers plunged from 247m in 2019 to 60m last year with airlines losing combined £20bn due to Covid

Airports in Britain suffered an 76 per cent fall in traffic last year as international air travel plunged by 60 per cent – with the coronavirus pandemic bringing it back down to 2003 levels.

Carriers in Britain are estimated to have lost nearly £20billion last year as the Civil Aviation Authority revealed just 59.5million passengers used UK airports in 2020, which was a fall of 87 per cent from 246.9million in 2019.

Other UK airports suffering falls of at least 80 per cent were Newquay, Southampton, London City, Leeds Bradford, Isle of Man and East Midlands – while Britain’s busiest airport Heathrow dived 73 per cent to 22.1million.

The plunge in air travel began in January 2020 but was only limited to a few countries in Asia, before the pandemic rapidly spread in the following weeks and brought transport activities to a virtual standstill in late March.

It comes as Ryanair today said it is braced for ‘the most challenging year’ in its 35-year history and expects a full-year loss of nearly €1billion (£880billion) as it told how Covid-19 continues to ‘wreak havoc across the industry’.

Globally, the International Civil Aviation Organization found passengers totals dropped by 60 per cent with just 1.8billion passengers taking to the air during the first year of the pandemic, compared to 4.5billion in 2019.

The International Civil Aviation Organization, a United Nations agency, found passengers totals dropped by 60 per cent in 2020 compared to 2019, with the above graph showing the evolution of world passenger traffic evolution since 1945

This graphic shows the breakdown of revenue losses across the world. Airlines have suffered £270billion losses resulting from the impacts of Covid-19, with airports and air navigation services providers losing a further £84billion and £9billion

The United Nations agency found airlines have suffered £270billion losses resulting from the impacts of Covid-19, with airports and air navigation services providers losing a further £84billion and £9billion, respectively.

This included losses of £73billion in Europe, £87billion in Asia/Pacific and £64billion in North America, followed by £19billion, £16billion and £10billion in Latin America and the Caribbean, the Middle East and Africa respectively.

The International Air Transport Association had initially predicted in April 2020 that the pandemic would bring a fall of 140million passengers in the UK resulting in a £19billion revenue loss, risking almost 661,200 jobs.

Border closures and travel restrictions saw the overall global number of passengers fall 92 per cent from 2019 levels by April, an average of a 98 per cent drop in international traffic and 87 per cent fall in domestic air travel.

Passenger traffic saw a modest rebound during the summer but this was short lived as it began falling again in September when the second wave of Covid-19 saw increased restrictions in many parts of the world. 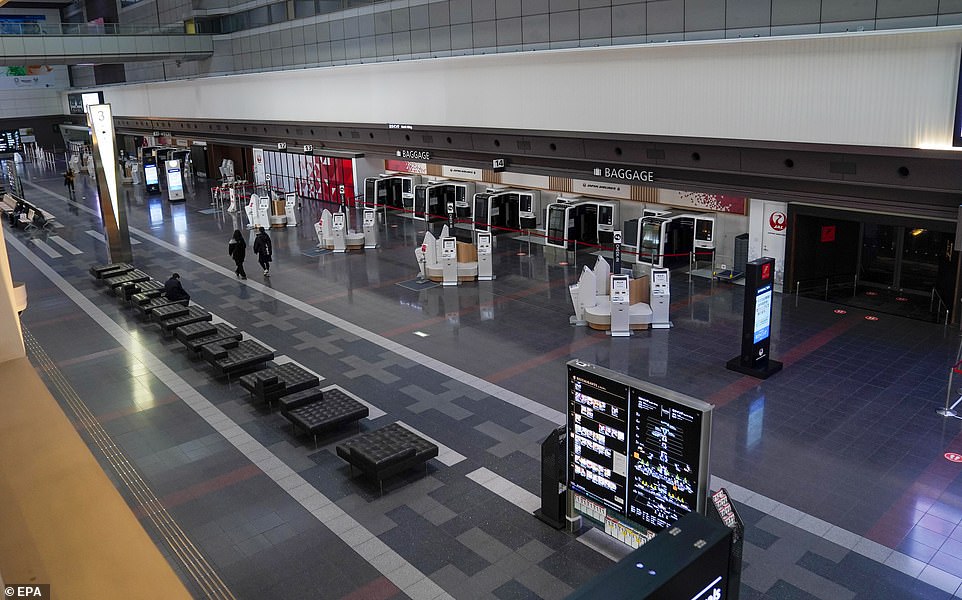 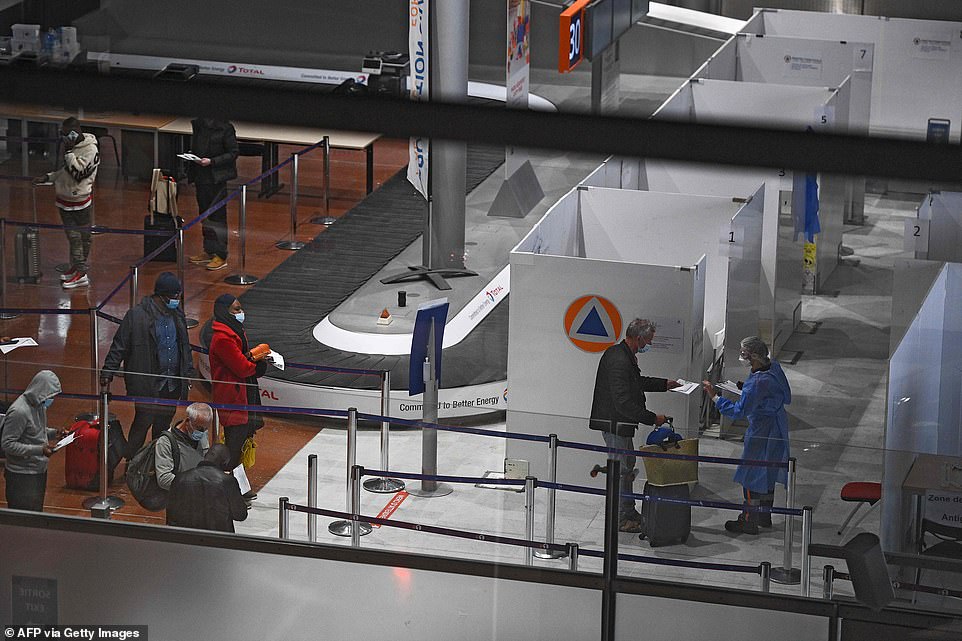 The plunge during the final four months of 2020 therefore brought a double-dip recession in air travel for the year, although domestic passenger numbers in China and Russia have already returned to pre-pandemic levels.

The ICAO reported that overall there was a 50 per cent drop in domestic passenger traffic globally, while international traffic fell by 74 per cent or 1.4billion fewer passengers.

It said the near-term outlook is for ‘prolonged depressed demand’, with any improvement in the global picture only by the second quarter of 2021 – dependent on vaccination rollouts and the effectiveness of restrictions.

The ‘most optimistic scenario’ suggests that by June 2021 passenger numbers will be expected to recover to 71 per cent of their 2019 levels, but a more pessimistic scenario foresees only a 49 per cent recovery. 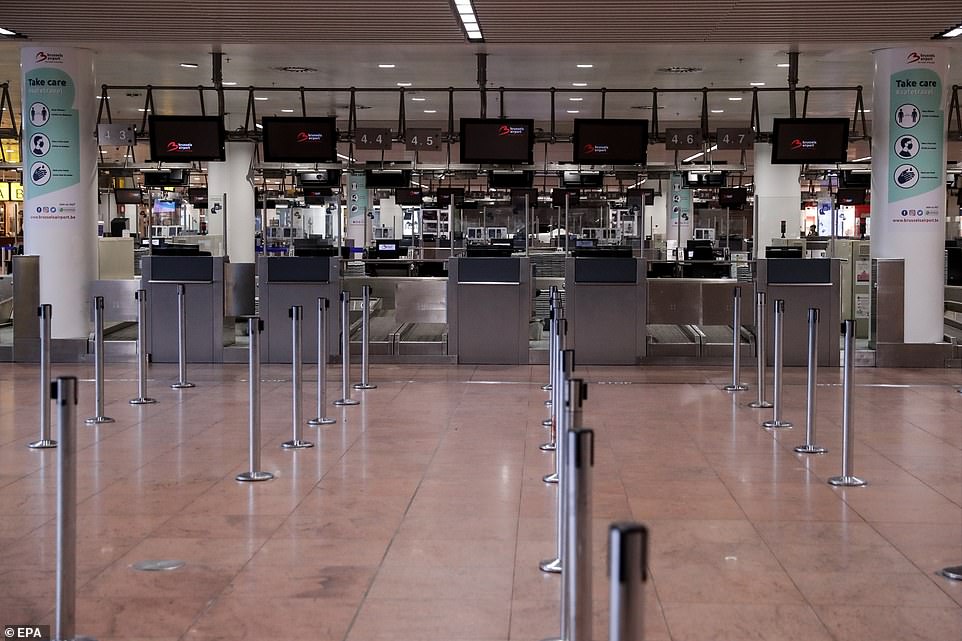 BELGIUM: An empty check-in area at Brussels Airport is pictured last Wednesday as planes remain grounded across the world 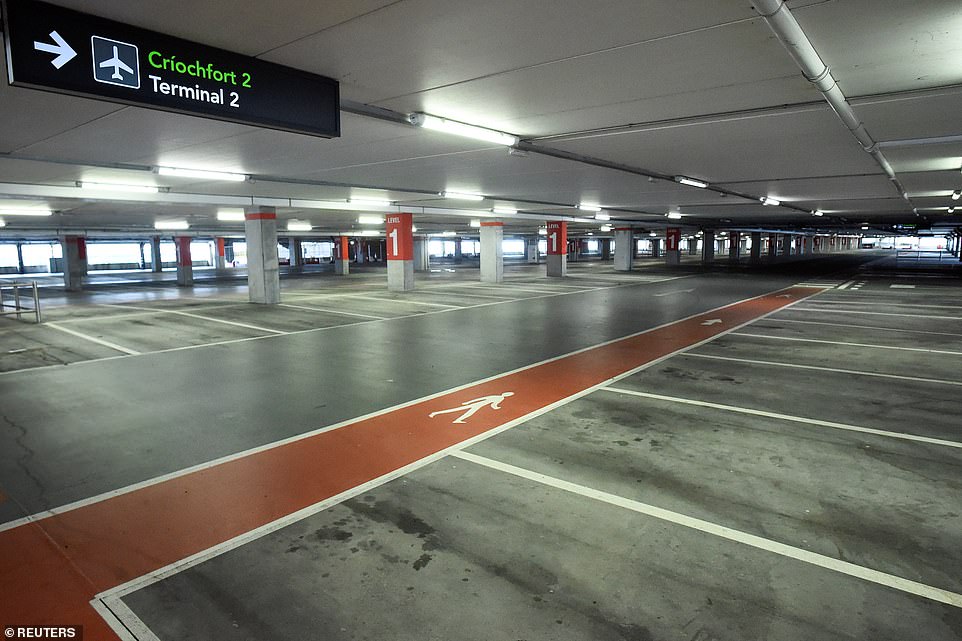 Today, Ryanair said it expects to lose nearly €1billion (£880billion) in its current financial year, by far its worst ever performance, but chief executive Michael O’Leary forecast a ‘dramatic recovery’ this summer on vaccine roll-outs.

The Irish low-cost airline, Europe’s largest, forecast a loss of up to €950million (£837million) in its current financial year, which ends on March 31, around five times larger than its previous record annual loss posted in 2009.

Mr O’Leary described the year as the most challenging in Ryanair’s 35 year history. But chief financial officer Neil Sorahan said the recovery should accelerate in July and September, the second quarter of its financial year.

Mr Sorahan, who said it should return to 70 per cent and 90 per cent of normal levels between October and March, added that Ryanair hopes ‘to be getting back to some kind of normality’ during the winter. 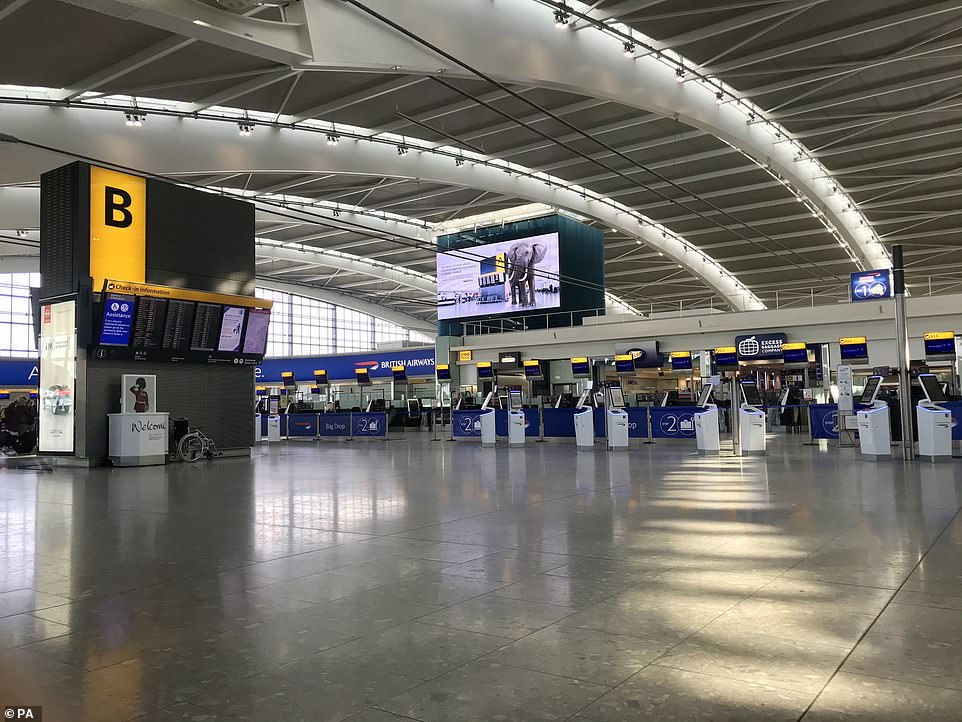 LONDON: An empty departure area of Heathrow Airport’s Terminal 5 at the start of the Covid-19 pandemic last March 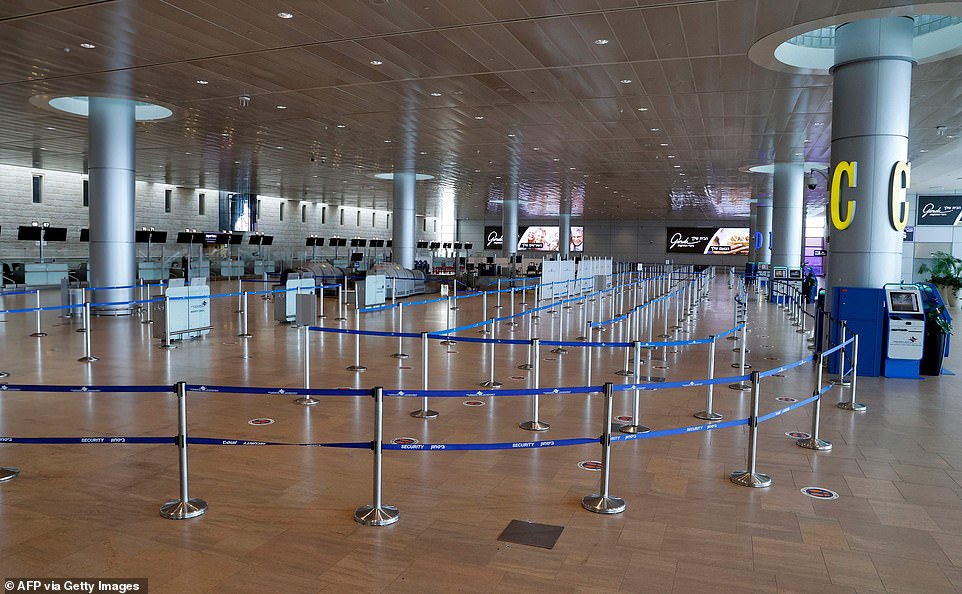 Covid-19 restrictions slashed Ryanair passenger numbers by 78 per cent in the last three months of the year, the third quarter of its financial calendar, pushing it to a quarterly loss of €306million (£270million).

Ryanair’s 82 per cent fall in revenue in the quarter compared with falls of 88 per cent at rival easyJet and 77 per cent at Wizz, which both reported results last week.

Ryanair is widely seen as one of the best-placed airlines in the world to weather the Covid-19 crisis due to its large cash balance and lack of long-haul and business-class.