UK: Johnson in pole position after first round of leadership vote 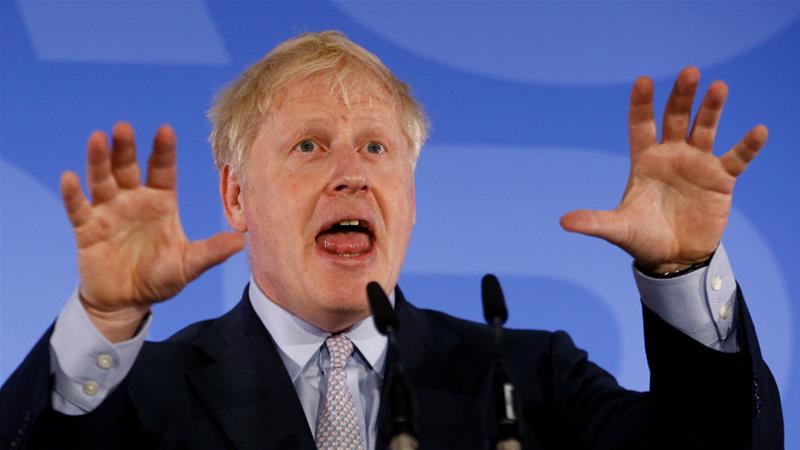 Boris Johnson is in the driving seat in the race for the leadership of Britain’s Conservative Party after three candidates – including the only two women in the contest – crashed out in the first round of voting to replace outgoing Prime Minister Theresa May.

The former foreign secretary was the clear favourite among the party’s 313 MPs, storming ahead with 114 votes, 71 ahead of his nearest rival, Jeremy Hunt. The race is over, however, for Esther McVey, Mark Harper and Andrea Leadsom.

Whoever wins the competition to become the leader of the Conservatives – the party that is currently in power – becomes Britain’s prime minister by default.

“Johnson is much further ahead than anyone anticipated, winning almost three times as many votes as his nearest competitor, Jeremy Hunt,” Al Jazeera’s Laurence Lee, reporting from London, said.

“The question now remains as to who the MPs who supported the now-eliminated candidates will switch their allegiances to, and with such a sizable lead, many are likely to sign on to Johnson’s bid, knowing he’ll win, and there’ll be a decent chance of cabinet positions in it for them.

“The psychology among Conservative MPs seems to be to ignore all the very well-documented problems with Boris’ personality, such as the predilection towards lying, because they believe he’s the only one who could beat Jeremy Corbyn in a general election. The MPs in this party seem to be prioritising holding on to their constituency seats.”

Out of the race

Leadership hopefuls needed at least 17 votes in Thursday’s secret ballot to go through to the second round, with anyone below that threshold automatically eliminated.

Esther McVey, a former television presenter who said parents should be allowed to take children out of lessons which included reference to same-sex relationships existing, and who spent more than $11,000 of taxpayers’ money on a personal photographer, and who came under fire on Wednesday for ill-informed comments about foreign aid, scored the lowest in the first round of ballots, finding just nine MPs who thought she would make an adequate prime minister.

Mark Harper, the former immigration minister who resigned after finding out his cleaner was not legally allowed to work in the UK, followed McVey out of the race, garnering just 10 votes. He thanked supporters on Twitter, saying: “I continue to believe we need a credible plan that delivers Brexit, keeps our promises and then takes our country forwards.”

Andrea Leadsom, who came second to Theresa May in the 2016 leadership election, also saw her bid for Downing Street come to an end after winning 11 votes. She said she had “loved being back on the leadership campaign trail”.

Still in the race

Foreign Secretary Jeremy Hunt came second in Thursday’s ballot, and is, at this stage, Johnson’s main rival for the top job. He won 43 votes.

Defence Secretary Penny Mordaunt, one of Hunt’s main backers, told the Press Association: “I think he’s attractive to many sides of the party because he’s a serious individual.

“But he’s also, I think, set out a clear and realistic plan for how we’re going to get the best Brexit possible for the country – because we don’t just have to do this, we have to do it really well.”

Hunt was one of the most controversial health secretaries in recent memory, imposing a new contract on junior doctors that led to strikes that had been unprecedented in 40 years, and refusing to give nurses a one percent pay raise.

Michael Gove, whose leadership ambitions were nearly scuppered at the weekend following allegations of hypocrisy over cocaine use revelations, came in third with 37 votes.

In a Twitter video, Gove said: “I’m delighted to be through to the next round of the Tory leadership contest along with a range of other very good candidates and I’d like to thank everyone who supported me from across the Conservative Party and beyond.”

In the 2016 leadership contest, Gove stabbed his former friend and ally, Boris Johnson, in the back, declaring his own surprise candidacy the morning Johnson was due to make his bid for Number 10, saying Johnson “wasn’t up to the job”.

In Thursday’s online video, he said he was “ready to unite, ready to deliver, ready to lead”.

Arch “no-deal” Brexiteer Dominic Raab secured 23 votes. His hardline Brexit position is probably closest to that of the now-eliminated Esther McVey, and he could, theoretically, pick up some of her supporters in the next ballot.

“I’m the change candidate who can be trusted to deliver Brexit by October, and has the vision and energy to take Britain forward,” he tweeted after the results were announced.

Sajid Javid, who as home secretary has enforced immigration rules that would not have let his father enter the country, got the support of 23 MPs. “I look forward to continuing to share my positive vision and my plan for uniting the country,” he said.

Health Secretary Matt Hancock, who has been criticised for putting around 20 NHS contracts out to tender after promising “no privatisation on my watch”, got 20 votes, and seemed surprised to get through the first round. “Thanks so much for the fantastic support – terrific to have more votes from colleagues than I could have hoped for,” he tweeted.

And Rory Stewart, the multi-lingual former Iraq coalition official who launched his campaign in a circus tent, is still in the race, having squeezed over the threshold with 19 votes. He told the Press Association he was “absolutely over the moon”.

“I’m going to have to now say to those who are neck and neck with me, I’m afraid this is the time to be serious.”

The remaining candidates have been invited to take part in a TV debate on Sunday, a day before the second round of official hustings in front of Conservative MPs.

There will then be a second ballot on June 18, when candidates will need to secure 33 votes to continue. Those still in the race by 8pm that night will face off in a second televised debate.

On June 19, there will be a third ballot, where the candidate with the fewest votes will be eliminated. On June 20, a fourth and fifth ballot will continue until just two candidates remain.

The backbench Conservative 1922 Committee – which is running the leadership contest – says it has provision for further ballots, but this is unlikely. The results will be announced at 1pm and 6pm respectively.

On June 22, Conservative Campaign Headquarters will begin the membership hustings process for party members to decide between the final two candidates.

A new leader will finally be announced in the week of July 22 – following the ballot of 160,000 Conservative members.

The prime minister will then see the queen to formally resign and the new Conservative leader will be invited to Buckingham Palace to form a government.

With the European Parliament in recess over the summer months, there will be little time remaining either to attempt to renegotiate Britain’s exit deal from the European Union – which the EU has already ruled out anyway – or to prepare Britain to leave with no deal, an eventuality most economists agree would be disastrous for the UK.

Johnson, who now appears almost guaranteed to take the reins of power, has used boorish rhetoric towards the EU, which hardly endears him to the world’s largest trading bloc.

“Johnson ignores the fact there is no time for a renegotiation, and to add to that, he is pretty much loathed in Brussels,” said Al Jazeera’s Lee.

“He used to be a journalist there and was known to make up stories about ‘bad things’ Europe was doing. And unless [Labour leader] Jeremy Corbyn comes off the fence very soon to campaign for a second referendum or another way to block Brexit in parliament, we could very well see Boris Johnson taking Britain out of Europe with no deal on October 31.”