The UK will be hit by low pressure until the end of the week, bringing even more rain and strong winds. But an area of high pressure from the Atlantic is set to build up across the UK bringing some pleasant weather into the weekend.

“With a heatwave earlier this month and in the last week we’ve had two named storms bringing very wet and windy weather across the country.

“With high pressure on the way this weekend we’re going to end the month with much more settled weather, with plenty of late summer sunshine for many.

“It’ll be a dry weekend for most areas too, though eastern areas can expect a few heavy showers on Saturday.” 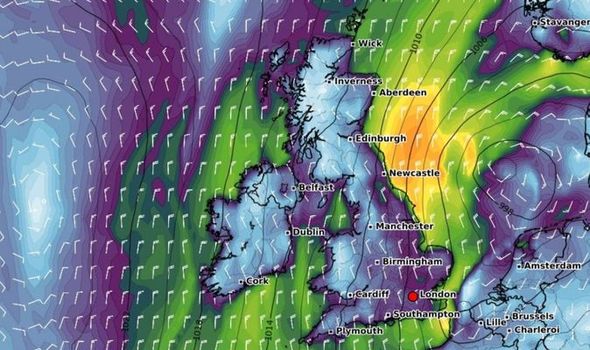 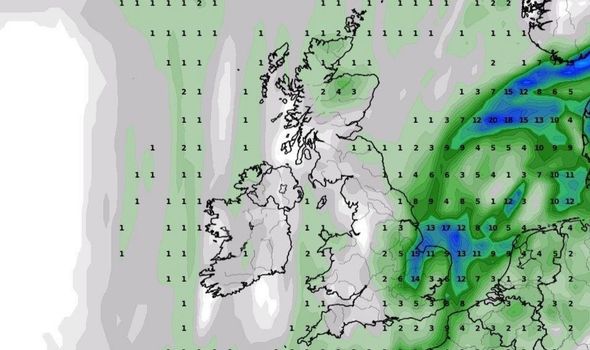 Saturday will see some sunny spells, especially across Northern Ireland, Scotland, Wales and in the West of England.

In these areas the weather will be mostly dry at the start of the weekend.

But it will feel chilly as a North West and northerly breeze swoops across many areas. 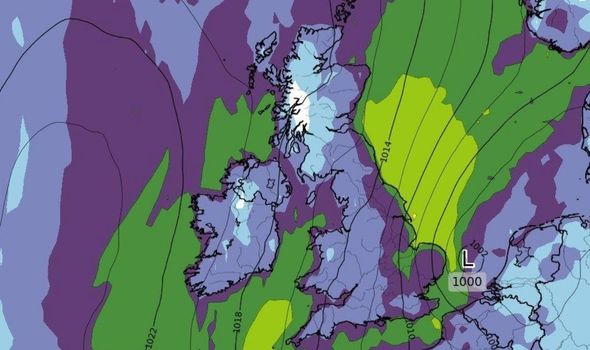 Eastern areas will be blasted with heavy rain and hail in certain spots.

Temperatures across the North Sea coasts will struggle to reach 13 or 14C on Saturday bringing a very miserable bank holiday weekend.

Parts of the East will have rainy weather well into the evening before they move onto the coasts of Norfolk and the South East.

Temperatures in these areas will drop to 7 or 8C. 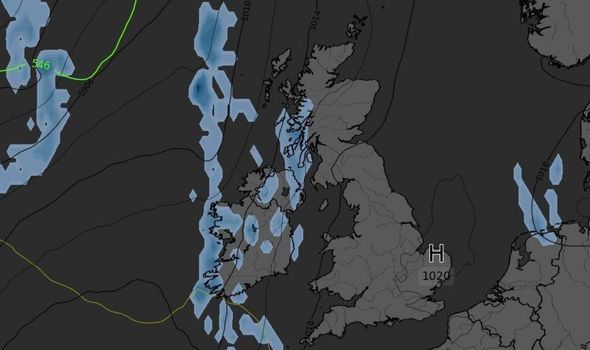 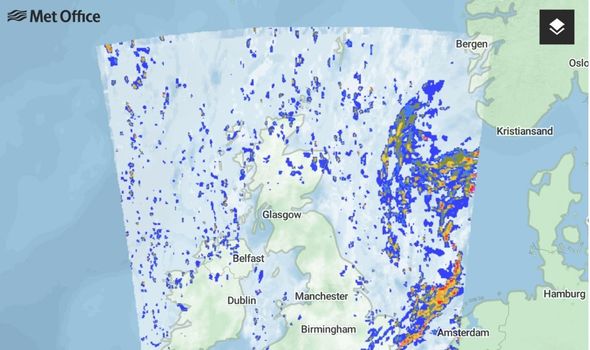 Mr Saunders said: “It’ll feel quite cool despite the sunshine, as northerly winds bring below average temperatures for the time of year with highs of around 16 to 18 Celsius.

“At night it’ll feel really quite chilly, with temperatures dropping to single figures for most, and a chance of air frost in Scottish glens.”

Many parts of the UK will experience a particularly cold night for late August.

In some rural Highland glens and sheltered vulnerable “hollows” in the North West, could have temperatures fall close to freezing overnight.

These areas may also experience a ground frost on Sunday morning as temperatures will mainly be around 3 to 8C. 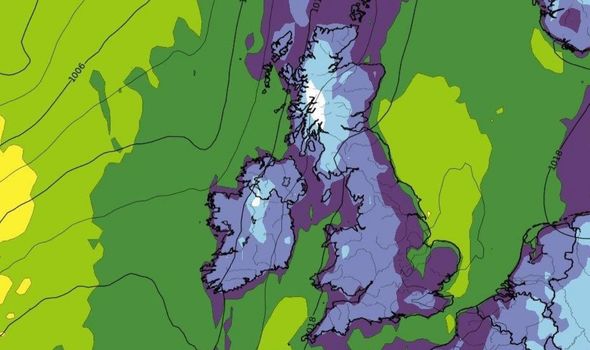 As the weekend ends, the weather will not improve any time soon.

Forecasters predict more rain and cold winds into the start of next week.

Deputy Chief Meteorologist at the Met Office, Chris Tubbs, said: “Later on Monday low-pressure will once again start to edge its way in from the Atlantic.

“It’ll turn cloudier with outbreaks of rain for Northern Ireland, with cloud and rain spreading to the rest of the UK by Tuesday.

“It’s likely to stay unsettled into the remainder of next week as we begin meteorological Autumn, with spells of wind and strong winds at times.”

END_OF_DOCUMENT_TOKEN_TO_BE_REPLACED

JOE Biden's son Hunter gave his dad a 10 per cent cut of his business deals and called him "my chairman", an former friend has claimed. Tony Bobulinski – an ex-business partner of Hunter – claims he heard Hunter and Joe discuss business dealings in China in 2017. Mr Bobulinski

END_OF_DOCUMENT_TOKEN_TO_BE_REPLACED

END_OF_DOCUMENT_TOKEN_TO_BE_REPLACED
Recent Posts
We and our partners use cookies on this site to improve our service, perform analytics, personalize advertising, measure advertising performance, and remember website preferences.Ok