Heavy rain and strong winds will continue to batter the UK even after Storm Alex moved on to the continent. The new warnings apply to the southwest Midlands and southern England, and areas of Fife and Moray in Scotland.

The first warning reads: “A band of rain will become slow moving and heavy across Wales, the West Midlands and into western parts of southern England.

“This is likely to bring flooding and some disruption to travel.”

“Many places will see 25 to 50 mm of rainfall (one to two inches), with totals of 70 to 90 mm (2.7 to 3.5 inches) expected over higher ground of Wales and southwest England as well as the potential for over 120 mm (4.7 inches) in some of the most exposed high ground of Snowdonia and Exmoor.

“The unusual wind direction associated with the rainfall will mean that the peak rainfall totals are likely to occur in some areas that are usually well sheltered and drier during unsettled spells of weather.” 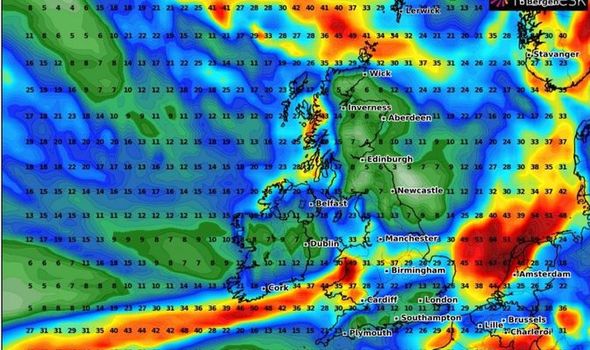 The second warning for Scotland will see the heavier rain restricted to higher ground.

The Met Office said: “An area of rain is expected to move into Scotland from the east on Saturday morning and persist though to Sunday before clearing westwards.

“This will bring widely 40 to 70 mm (1.5 to 2.7 inches) of rain to this area with over 120 mm (4.7 inches) likely over the high ground and to flooding and travel disruption – particularly across parts of Aberdeenshire and Angus.”

Scotland’s amber warning is in place for 12 hours – from 6pm Sunday to 6am today. 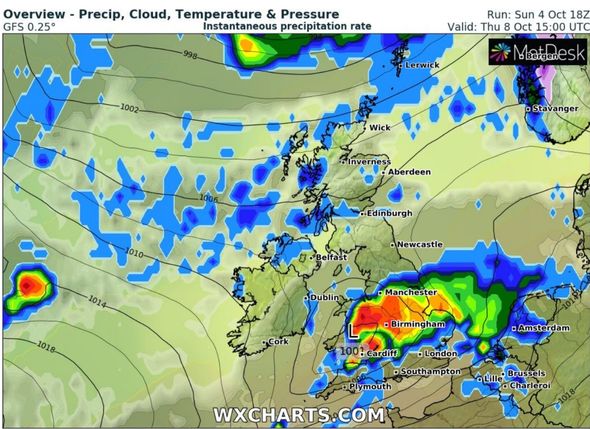 A yellow warning applies to the west.

It reads: “Heavy rain will push north and west across the UK on Saturday, becoming slow moving and persistent and last through Saturday night into Sunday over eastern Scotland, much of Wales, and the west of England.

“The highest totals are likely over the high ground of eastern Scotland, north Wales and southwest England where a few places may see over 120 mm of rain. 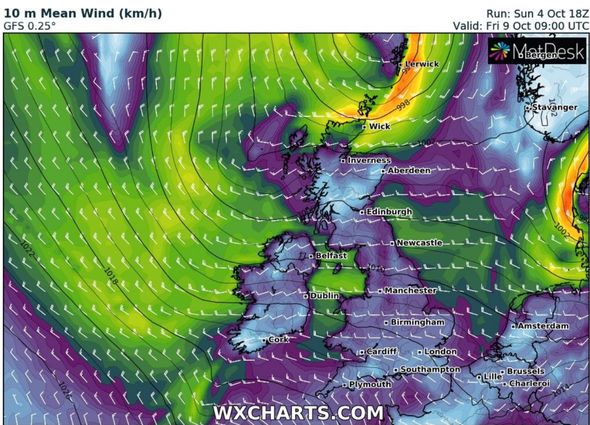 “The unusual wind direction associated with the rainfall will mean that the peak rainfall totals are likely to occur in some areas that are usually well sheltered and drier during unsettled spells of weather.”

She said: “At this time of year, trees are in full leaf and drains can become blocked from tree debris – with many places seeing 25-50mm of rain and around 70-90mm over high ground, there is a heightened risk of flooding and very difficult driving conditions this weekend.

“In areas with Amber warnings, such as Snowdonia, Exmoor and eastern Scotland, over 100mm of rain could fall over the weekend – this is likely to lead to significant impacts from flooding.” 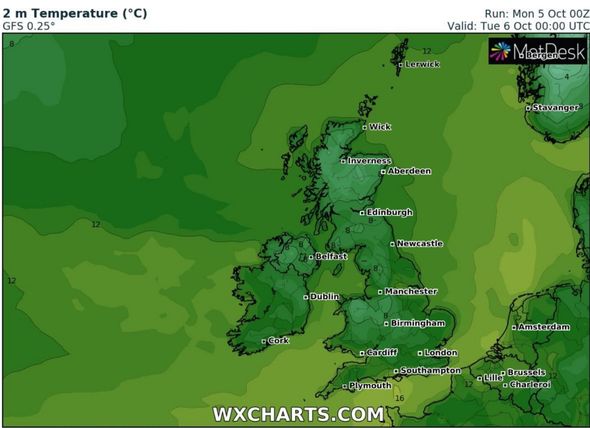 “Given the severe weather this weekend, the Met Office is urging people to keep a close eye on the forecast and warnings during this spell of challenging and disruptive weather.”

RAC Breakdown spokesman Rod Dennis warned motorists not to drive through water unless they know exactly how shallow it is.

He said this week: “Heavy rain will make road conditions miserable if not downright dangerous for drivers this weekend, and they’ll need to be prepared for an ugly mix of surface spray, gusty winds and more than likely some disruption on the roads.

“Floods are also a possibility so drivers should remember never to attempt to drive through water unless they know for sure that it’s shallow enough.

“For drivers who are unlucky enough to breakdown in the horrid conditions, our patrols will be working around the clock to get them moving again.”

END_OF_DOCUMENT_TOKEN_TO_BE_REPLACED

We will use your email address only for sending you newsletters. Please see our Privacy Notice for details of your data protection rights. The TV show came under fire as part of a wider conversation about the use of offensive language and portrayals of people from different backgrounds. Despite Cleese’s

END_OF_DOCUMENT_TOKEN_TO_BE_REPLACED

END_OF_DOCUMENT_TOKEN_TO_BE_REPLACED
Recent Posts
We and our partners use cookies on this site to improve our service, perform analytics, personalize advertising, measure advertising performance, and remember website preferences.Ok