SEVERE thunderstorms will sweep into the UK today – sparking two days of intense downpours that have prompted an extended Met Office weather warning.

Heavy showers are set to disrupt travel and bring a risk of floods starting at about lunchtime today – as the yellow weather warning for thunderstorms comes into effect. 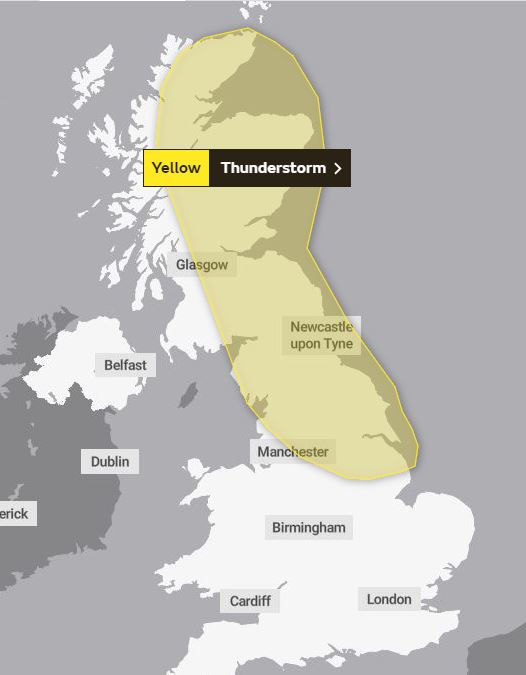 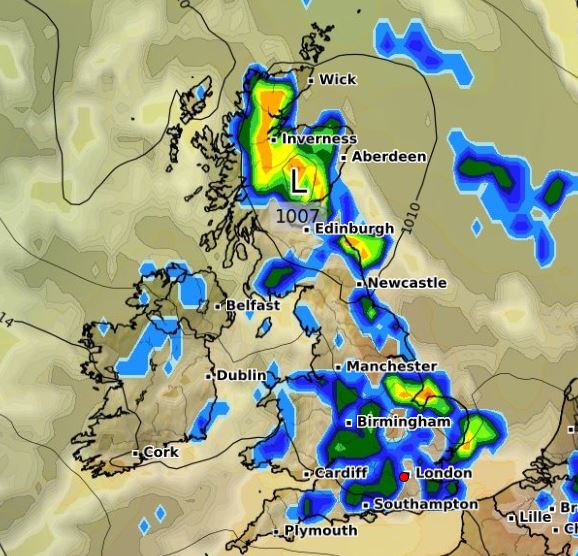 Eastern parts of Scotland – where the weather warning is in place – could see between 15mm and 25mm of rainfall in an hour and up to 40mm in just a few hours.

Elsewhere, rain and thick cloud will make it a dreary day for millions in the North, Northern Ireland and central parts of England and Wales.

The Met Office said: "Rather cloudy in northern and central areas with outbreaks of rain.

"Some brighter spells are possible in the afternoon, with a risk of heavy thundery downpours in northeast Scotland.

"Drier and brighter in the south and feeling warm and humid."

Showers will begin to fade this evening – but it won't last long as another yellow weather warning will come in starting on Thursday morning prompting a dire "danger to life" warning.

The Met Office issued the chilling weather forecast for heavy rain amid fears of homes being flooded and travel chaos for millions.

Those worst affected will be in parts of Scotland, East Midlands, North East England, North West England and Yorkshire.

The warning reads: "Heavy showers and thunderstorms may cause some travel disruption and flooding in places during Thursday afternoon and evening.

"There is a small chance of fast flowing or deep floodwater causing danger to life."

WORSENS THROUGH THE WEEK

Weather conditions could get even worse by Friday – as the heavy and thundery showers get into full swing.

But it’s not all bad news as a "hot air plume" is predicted to arrive on Saturday – potentially bringing with it highs of 28C.

Weather forecasters warned there may be outbreaks of heavy rain across the northern half of the UK on Wednesday.

These showers are then expected to turn thundery by the end of the week.

But the Weather Channel has forecast an explosion of heatwaves before the end of the summer. 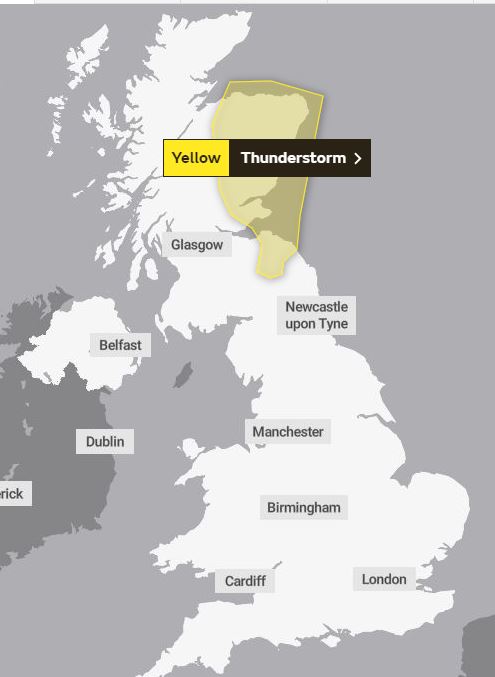 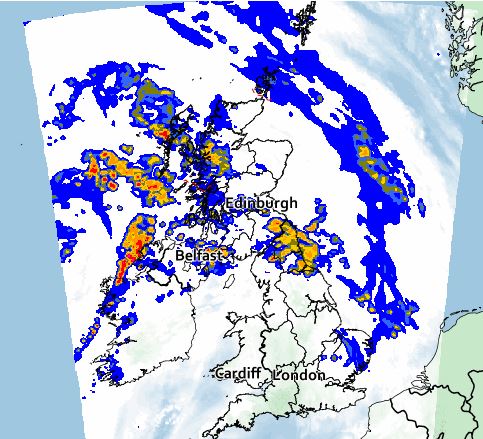 Leon Brown, head of meteorological operations at the Weather Channel, says the first "hot air plume" will arrive on Saturday.

He said: “After unprecedented June heat across Europe, four more periods people would call heatwaves are forecast in the UK this summer.

Mr Brown predicts the heatwaves will come in waves, with the next arriving mid-July.

He added: "These spells are forecast to occur like waves every two weeks or so, with the next hot spell in mid-July, then in early August, late August and early September.

"Plumes of heat are forecast from Africa, bringing thunderstorms, with cooler Atlantic periods and some rain in between.

These predictions would see a return of the heatwave seen in June across the UK – when temperatures peaked at 35C.

It came as a "tongue of fire" swept Europe, with roasting, dangerous highs of 46C in France.

Experts warned the extreme highs were made at least five times more likely because of climate change, caused by earth-heating greenhouse gas emissions.

SUNSHINE AND SHOWERS AHEAD

However, the Met Office said it was impossible to accurately predict more than five days ahead – and said that highs of 28C this Saturday were unlikely.

Becky Mitchell of the Met Office said: "We’re going to see some higher temperatures this week, starting off in the low 20s, and it will turn warmer during the rest of the week.

"From Wednesday onwards we’ll see highs of 25C and a similar picture on Thursday. 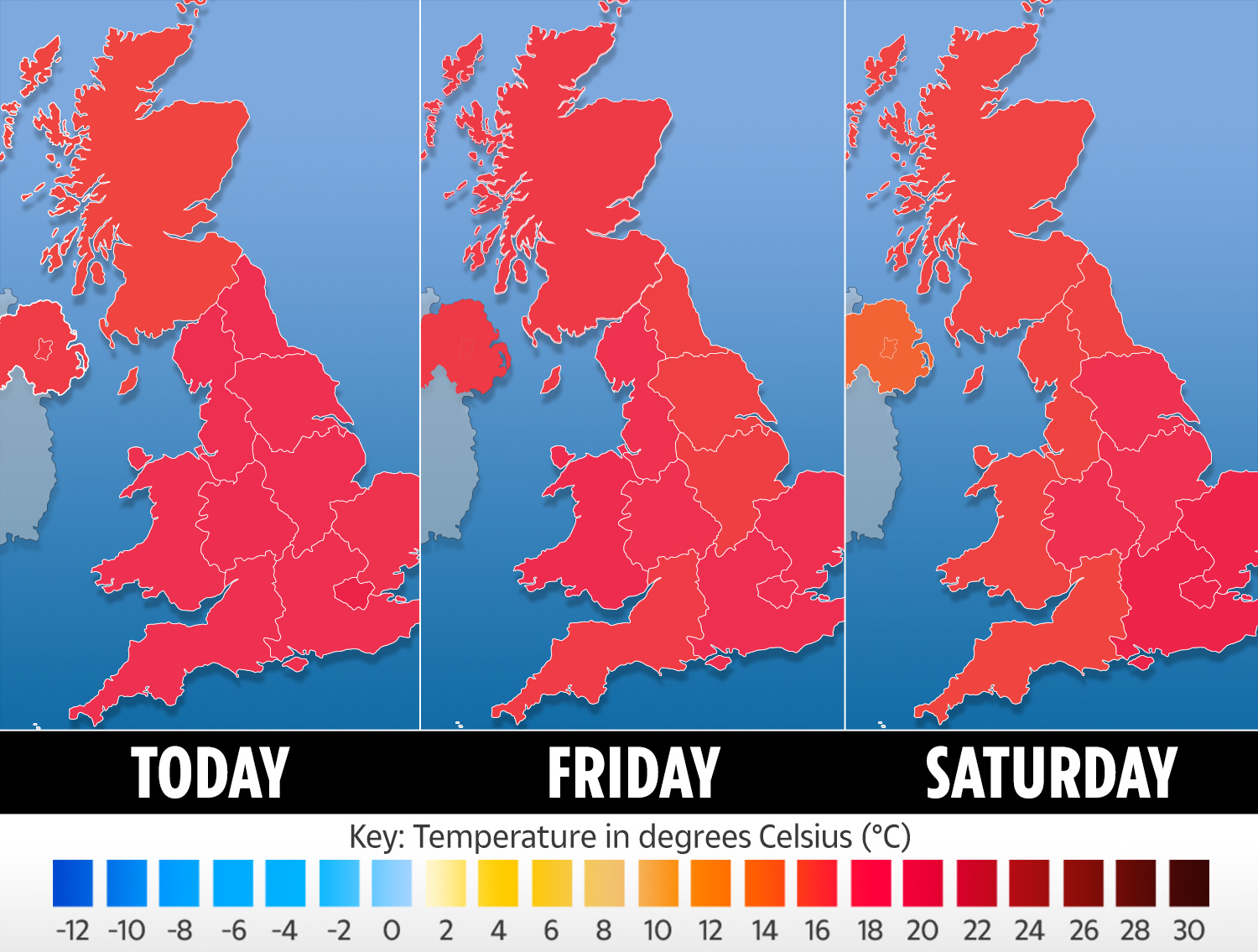 "At the moment it looks like temperatures will probably peak on Friday with highs of 26C, but at the weekend things might turn a little fresher, though it will likely stay in the low 20s."

Ms Mitchell said sunshine and showers would mark the rest of the week, with thunderstorms triggered by the humidity likely on Friday.

The Met Office forecaster said that there was a "slightly higher likelihood" we'd see above average temperatures in the next month.

The average July temperatures for the UK as a whole are 19C, though in the south an average would be more like 25C.

A heatwave is defined by three or more days at a consistently high temperature. For most of the UK this would be 25C and above, though in London it would have to reach 28C. 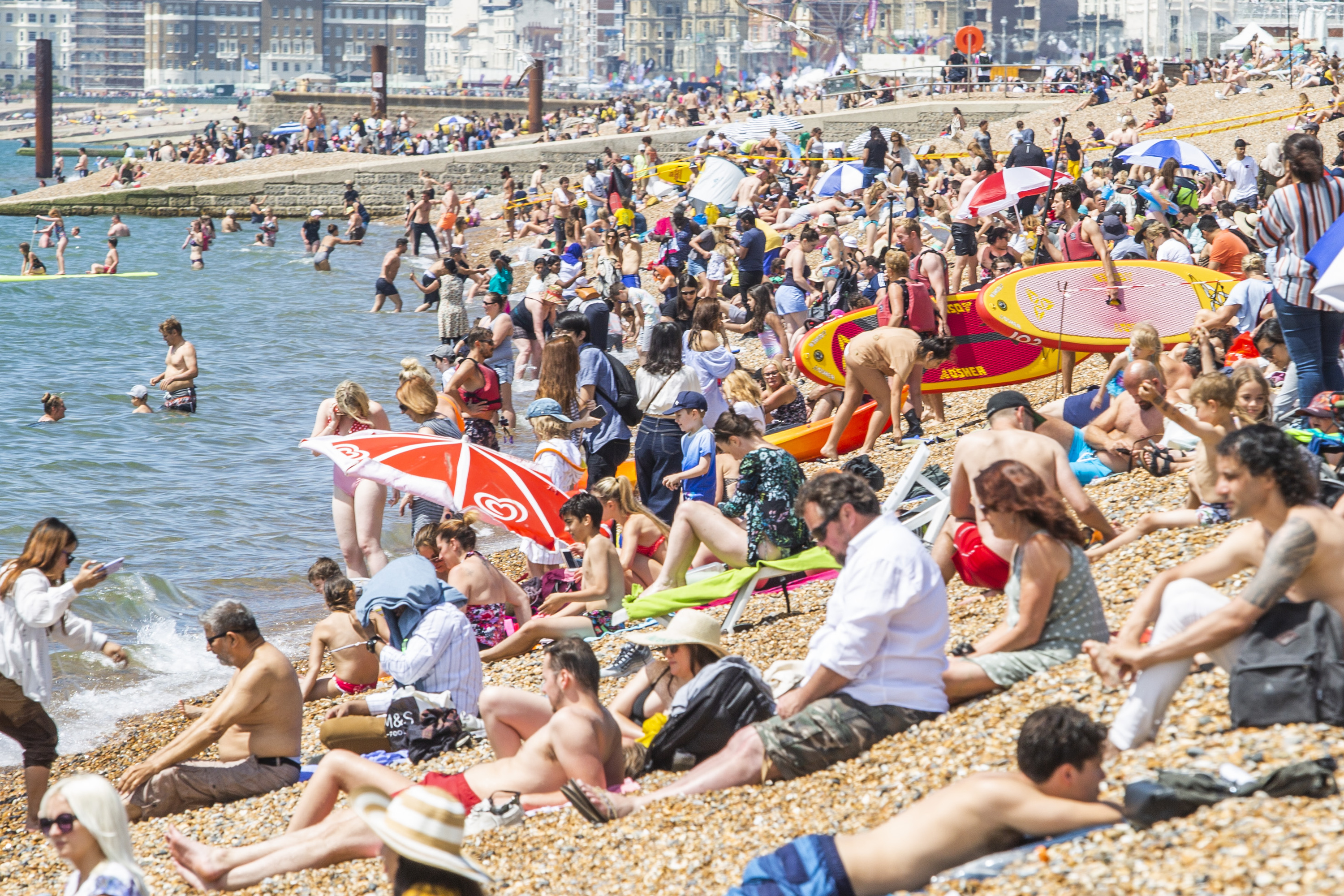 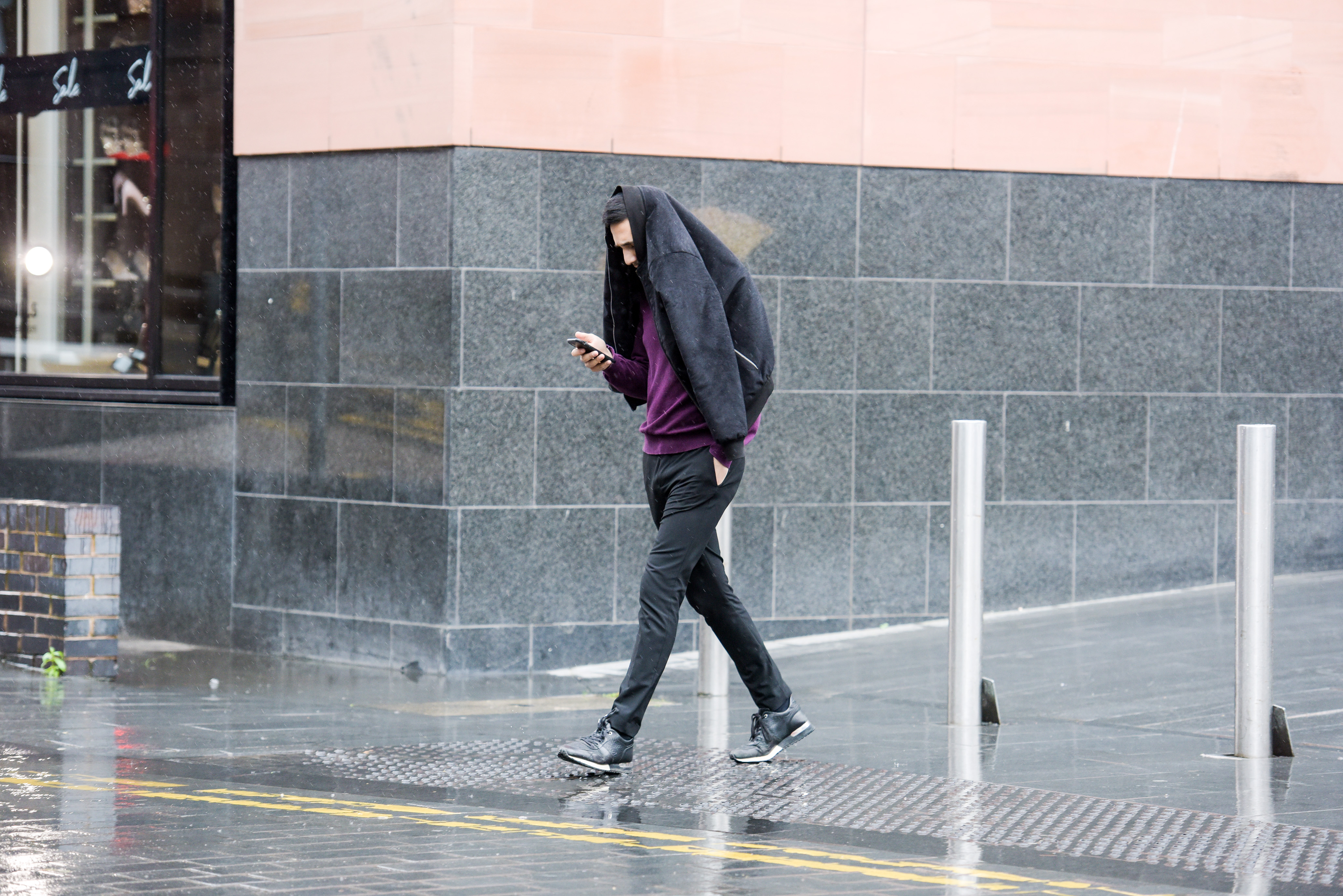 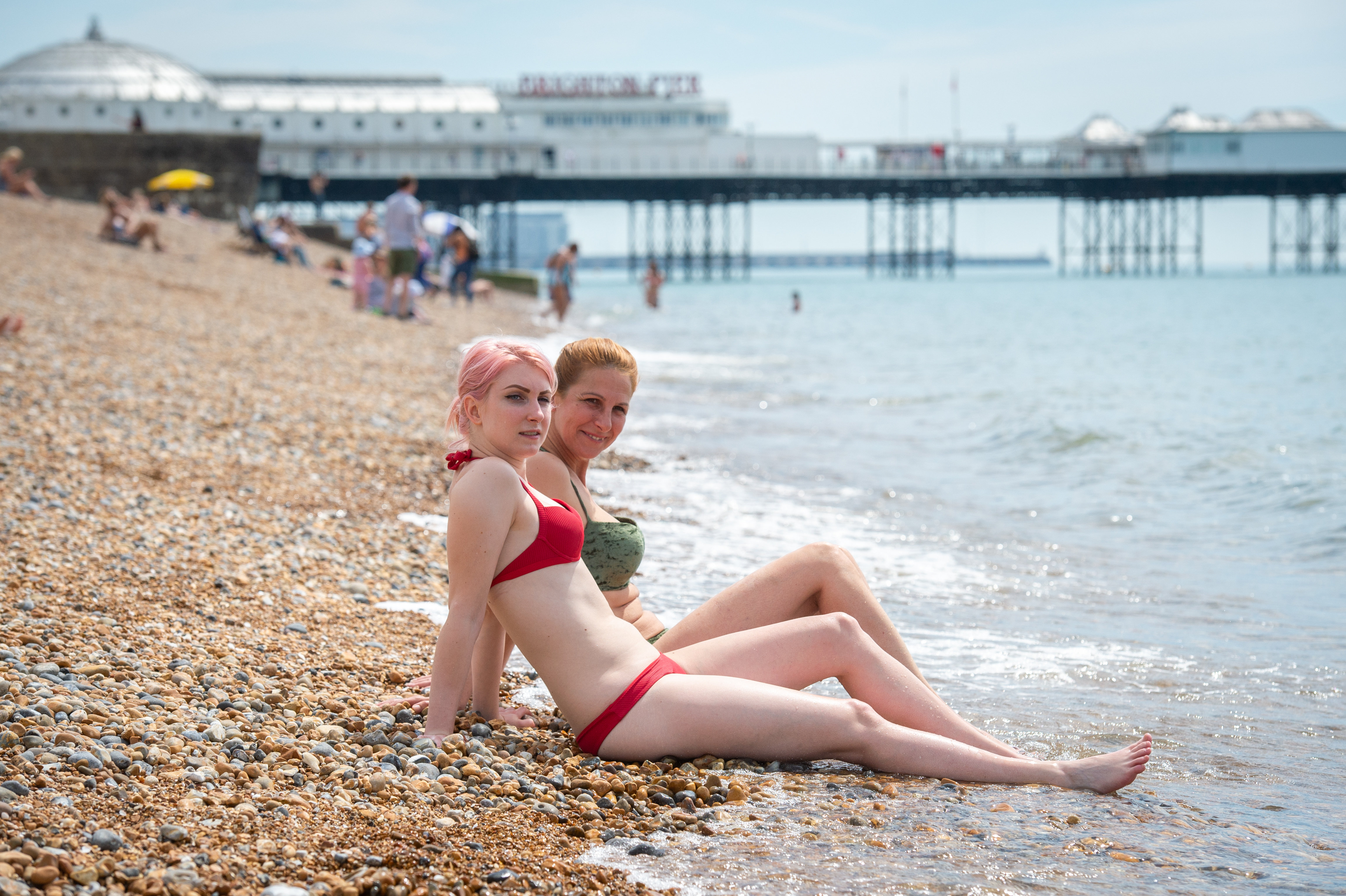 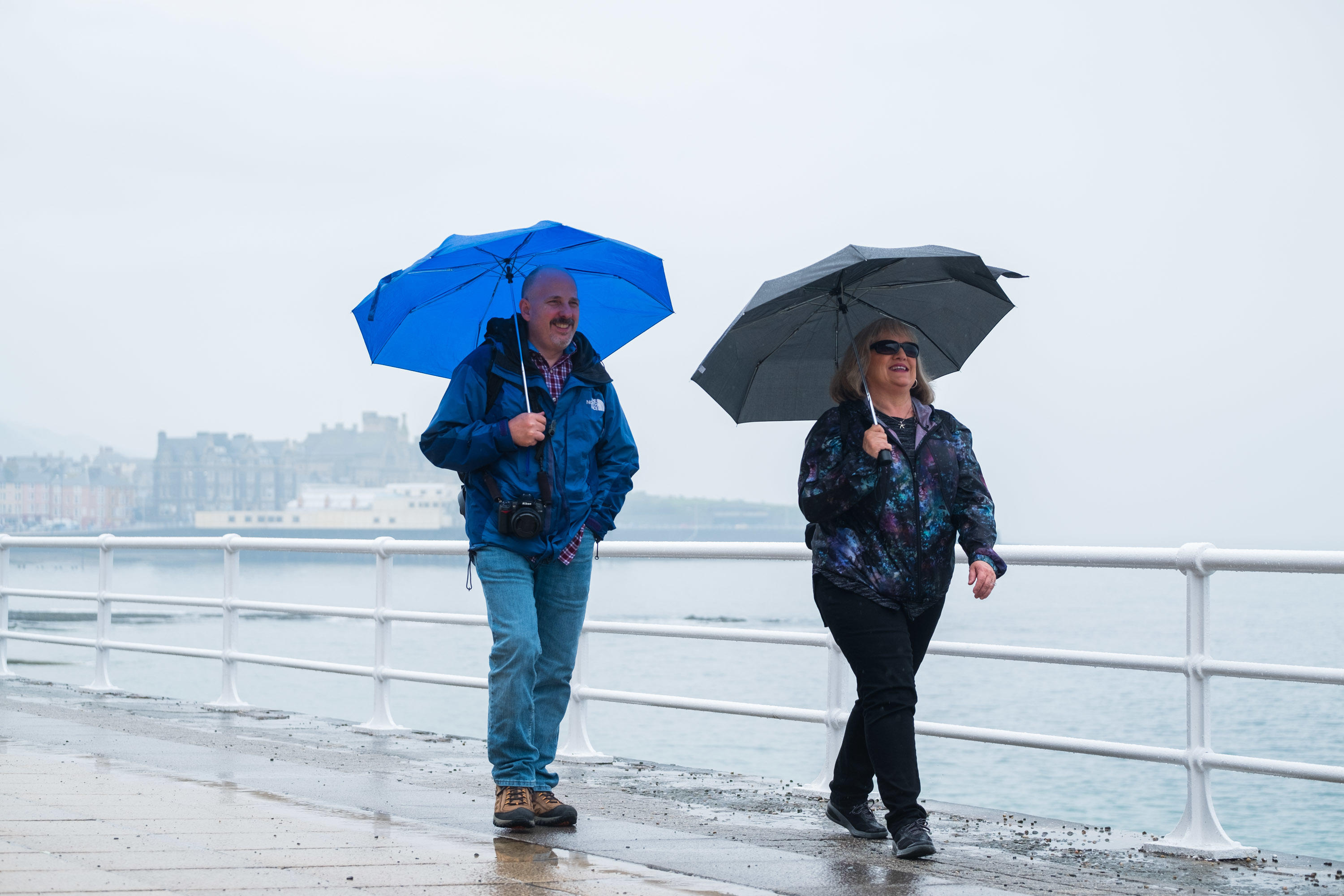