Mr Burkill began bus saying: “Bit of a chilly start across some northern parts due to some clear skies overnight.

“Otherwise, on Monday morning we have got heavy rain pushing into the southeast and showers elsewhere developing as we go through today.

“Now taking a close look first thing, it is a bright start across much of Scotland but with clear skies overnight it will be a chilly one and there could be a touch of frost across some prone spots.

“Down the western side of the UK it is going to be a bright start to the day for most places but we have got this heavy persistent rain that has pushed in from the southeast. 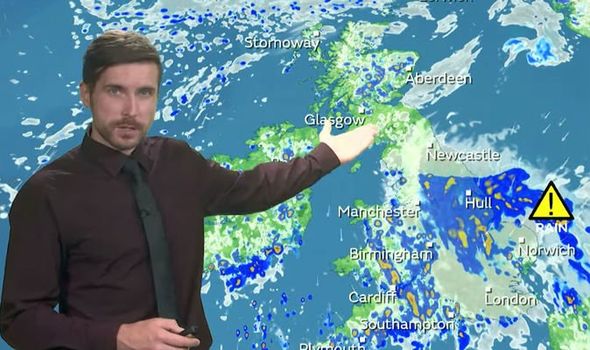 “This rain is going to last for much of the day, as a result, we do have a rainfall warning in force.

“We could quite widely see 15 to 25mm of rain across this eastern southeastern corner of the UK and in some places up to 60mm of rain is possible.

“As a result some flooding is likely and we are going to see some disruption to travel and commuters should watch out for spray on the roads.”

She explained that although the heaviest rain is expected to be in the southeast of the country, many parts of the UK will experience the wet and windy weather as the week continues.

She said: “Through Monday night going into Tuesday morning that rain just drifts its way gradually a little bit further north and west so it will clear away eventually.

“Further north it is largely dry on Tuesday but a few showers across northern parts of Scotland but overall a mild start to the day tomorrow.

“We have got the rain from the word go and it will be affecting parts of the Midlands, northern England, Wales and the southwest of England too.

“It will be a bit drier in the southeast but we could well see some heavy and possibly thundery isolated showers developing.”