UK weather: Moody skies and heavy showers on their way

The warning, which applies to southwestern Scotland until 6pm, includes the area west of Dumfries as well as including Stranraer. There is the possibility of homes being flooded, while bus and train services are likely to be affected with journey times taking longer.

Spray and flooding on roads could also mean that journeys could take longer.

In contrast eastern England will enjoy largely “pleasant” and dry weather with the possibility of temperatures reaching highs of 24C.

He said: “Here comes the next weather system, though turning into a pretty wet night for Northern Ireland. 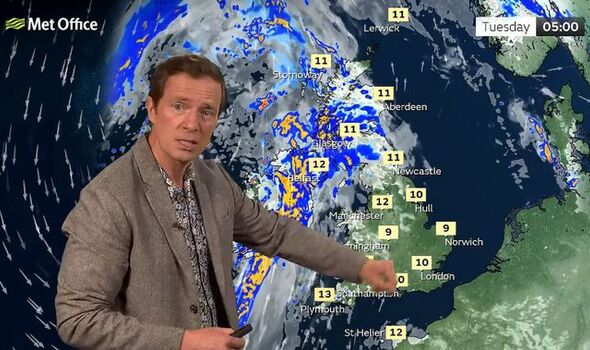 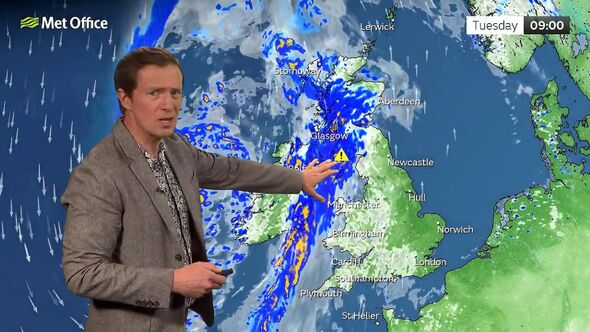 “And that rain really starting to pop up and by dawn over southwestern parts of Scotland.

“Elsewhere those largely clear skies will allow temperatures to drop down to single figures through central and eastern parts of England certainly in rural areas.

“But a fine sunny start here on Tuesday. And actually for much of eastern England, it’s going to be a pretty pleasant summer’s day.

“But further west, a wet start for Northern Ireland and a wet old day for western parts of Scotland. 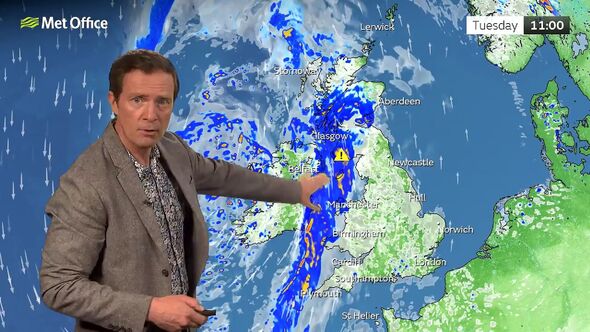 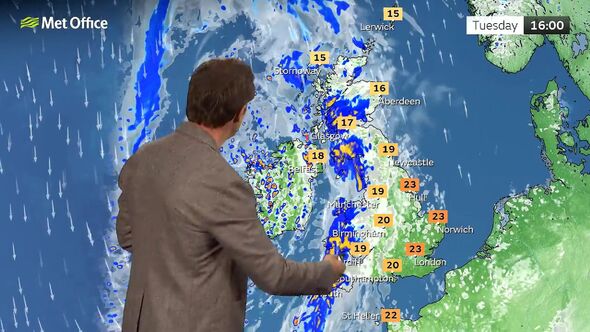 “That rain is particularly heavy and persistent over the southwest where we have a Met Office yellow warning in place.

“That rain will eventually creep into the western parts of England and Wales by the afternoon clearing from Northern Ireland.

“But heavy showers are likely to follow. They’ll be hit and miss, but some further downpours certainly possible.

“Now that rain will be across southwest Scotland, southern parts of the highlands but probably not too much getting through the central belt. 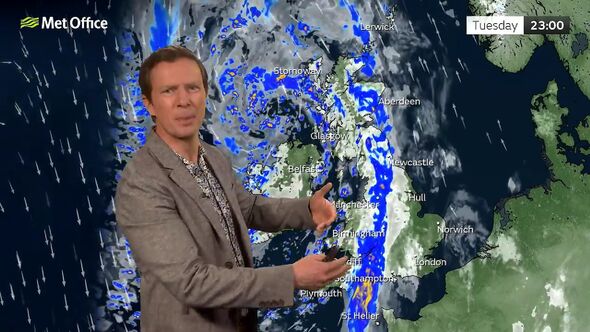 “Much of eastern England as well with sunny spells feeling quite pleasant 20 to 23 possibly even 24C.

“But blustery and increasingly wet conditions on this western coast means it will feel pretty cool for the time of year.

“The weather front will continue to work its way eastwards through Tuesday evening.

“Tending to break up a little as it goes so the rain won’t be as persistent.

“But nevertheless turning fairly soggy it looks like through the night across much of northern England and the Midlands.”