US and Russian ships narrowly miss colliding in Philippines waters

Moscow: A Russian destroyer nearly collided on Friday with a US warship in the Philippine Sea on Friday after years of escalating tensions.

Each side blamed the other for the episode, which took place in waters that have previously been the site of an intense naval rivalry between the United States and China, but from which Russia, though a Pacific power, had been largely absent.

NATO has repeatedly accused Russia's warplanes and warships of staging dangerous, threatening manoeuvres in the Baltic and Black seas, but the incident on Friday was the first potentially catastrophic near miss involving Russian and US naval vessels so far from Russian shores since the end of the Cold War. 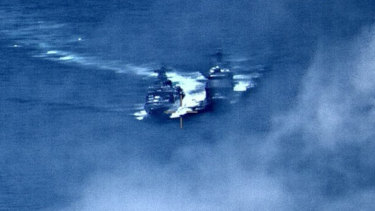 The US Navy's 7th Fleet, which patrols the Pacific, said the Russian destroyer's crew had navigated unsafely and forced the US warship into an avoidance manoeuvre. The Americans released video clips to corroborate their version of events.

Russian state-controlled media suggested that the near collision, the second close encounter involving US and Russia forces this week, had been staged by the Pentagon to coincide with a visit to Russia by President Xi Jinping of China, who has overseen a steady increase in economic and military ties between Beijing and Moscow.

China and Russia are not officially military allies, but they have staged joint military exercises and increasingly look to each other for leverage against Washington, with which both have severely strained relations. 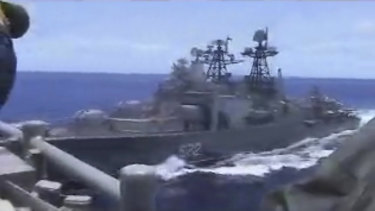 In this image from video provided the Russian destroyer, left, sails very close to the USS Chancellorsville.Credit:US Navy

Major General Vladimir Bogatyrev, chairman of the National Association of Reserve Officers, told Russian state media that "it is not by chance that these actions happened during the visit to Russia by the head of the People's Republic of China".

The United States, he added, had deliberately provoked the incident in the Philippine Sea in an effort to "demonstrate to us the supposed strength of the American fleet and lawless behaviour in the wide expanse of global seas."

But he also hinted that Russia was not merely an innocent bystander.

"The protest of our sailors was completely justified," he said, without specifying what "protest" he was referring to.

A US official said the two ships nearly collided about 160 miles south of Okinawa, a Japanese island on which the United States has had an air base and various other military facilities since the end of World War II. Russia, which has declined to give up territory seized from Japan in 1945, has no quarrel with US facilities in Okinawa.

The presence of Russia's navy south of Okinawa — more than 1930km from the Russian Pacific Fleet's home port in Vladivostok — suggested less an effort to assert any Russian claims in the area than a gesture of support for China.

The US Navy said the near collision took place around 11.45am local time as a result of an "unsafe and unprofessional" move by a Russian destroyer, the Admiral Vinogradov, which came within 15 to 30 metres of the guided missile cruiser Chancellorsville, according to a statement. The cruiser had to quickly manoeuvre to avoid a collision, the Navy said.

Commander Clayton Doss, a spokesman for the 7th Fleet, said in the statement that the Russian destroyer had made an "unsafe manoeuvre" against the Chancellorsville, "putting the safety of her crew and ship at risk." 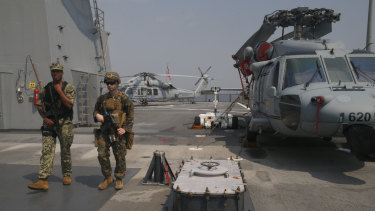 US marines patrol the USS Blue Ridge as it anchors off Manila, Philippines.Credit:AP

Russia gave an entirely different version of events, with the Pacific Fleet press service telling the state-run news agency Tass that the US vessel had hindered the passage of the Admiral Vinogradov, forcing it to perform a dangerous manoeuvre to avoid a collision.

"The US cruiser Chancellorsville suddenly changed its course and crossed the Admiral Vinogradov destroyer's course some 50 metr3s away from the ship," the press service said, according to Tass. "In order to prevent a collision, the Admiral Vinogradov's crew was forced to conduct an emergency manoeuvre."

Acting US Defense Secretary Patrick Shanahan said the United States would lodge a formal diplomatic protest with Russia, objecting to the "unsafe and unprofessional" behaviour of the Russian destroyer.

"We'll have military-to-military conversations," Shanahan told reporters at the Pentagon, adding that the encounter "will not deter us from conducting our operations."

The US Navy released two video clips of the events on its YouTube channel, including one that showed the Russian vessel quickly pulling close alongside the Chancellorsville. Also visible, however, were what appeared to be sunbathing Russian sailors on deck of the Admiral Vinogradov, which suggests the Russian vessel was not on high alert at the time and was not engaged in a planned provocation.