CHARLOTTE, N.C. (AP) – Sgt. Taylor Knueven always knew sexual assault and harassment plagued the U.S. Army. But the combat medic’s own assault early last year opened her eyes to the broken system surrounding one of the military’s most infamous problems.

Earlier this week, Knueven and six other soldiers went before a panel in the 18th Airborne Corps headquarters at Fort Bragg, N.C., to present ideas on how the Army can revamp the way it deals with sexual assault and harassment.

The Army’s Sexual Harassment/Assault Response and Prevention Program, also known as SHARP, has been the subject of much scrutiny, especially following the slaying of Spc. Vanessa Guillen by a fellow soldier inside a Fort Hood, Texas, armory last April. 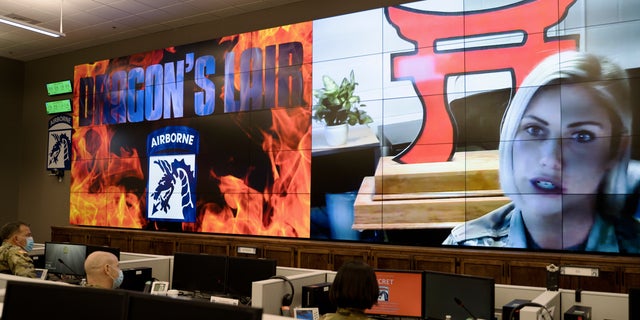 In this Monda, Feb. 22, 2021, photo released by the U.S. Army, Sgt. Taylor Knueven pitches an idea to better the U.S. Army’s Sexual Harassment and Assault and Prevention Program to a panel at Fort Bragg, N.C. Knueven shared her own story of assault during the "Dragon’s Lair" panel. The 18th Airborne Corps says it plans to implement parts of all seven pitches heard at the presentation. (Sgt. Marygian D. Barnes/U.S. Army via AP)

The proposal Knueven presented to the panel Monday would address gender and military bias by reworking the composition of offender separation boards. She said her attacker went before a board consisting of three men and no women.

Knueven described in detail events on the night she says she was assaulted by a fellow soldier at a concert. And she recounted how she felt about reporting the incident and what went through her mind when she said she learned he would remain in the Army and ultimately face little punishment.

“I thought it was a total slap in the face to myself,” Knueven said.

Last week, Defense Secretary Lloyd Austin said at his first Pentagon news conference that reducing sexual assault is one of his top priorities and that he would introduce stronger efforts to fight it.

“We have been working at this for a long time in earnest, but we haven’t gotten it right,” he said.

Staff Sgt. Shameka Dudley wants to see stale SHARP training PowerPoints replaced with virtual reality scenarios that would offer soldiers a glimpse at assault and harassment scenarios through the eyes of survivors, aggressors and bystanders.

“We have this same training and it’s really not changing much,” Dudley said. “The numbers are still going up.”

The 28-year-old mother of five handed out virtual reality glasses to the panel as she recounted the success she’s seen the method play in the treatment of veterans struggling with Post Traumatic Stress Disorder.

US AIRSTRIKE IN SYRIA UNDER BIDEN AND 2017 TOMAHAWK STRIKES ORDERED BY TRUMP: THE DIFFERENCE

For her, it’s about understanding and empathy.

“The majority of people learn from doing, from seeing, from being able to be there,” Dudley said.

Dudley says soldiers who have experienced sexual trauma can opt out of the training as it may serve as a trigger.

The presentations were made as a part of the 18th Airborne Corp’s “Dragon’s Lair” series, a “Shark Tank”-like competition that sources innovative ideas from within the Army’s ranks.

“This is an amazing effort to connect our best and brightest directly to senior leaders who are ready to take action. It just feels different this time,” Lt. Col. Scott Stephens, who presented to the panel, tweeted Monday.

The Corps says parts of all seven presentations will be implemented across the Army. Some ideas, like Knueven’s will be easier than others and involve simple policy changes, according to Col. Joe Buccino, public affairs officer for the 18th Airborne Corps.

The corps has already begun conversations with a film producer to bring Dudley’s idea to life, according to Buccino.

“I am confident, very confident, we will implement all ideas,” he told The Associated Press.

Knueven hopes that’s the case. She sighed when asked if change is coming to the Army. “I don’t know, I sure hope so.”