US death toll approaches 180,000 as FDA staff fear COVID-19 is being politicised

Coronavirus-related deaths in the United States were nearing 180,000 on Sunday as states hit hard by a surge of infections earlier in the summer continued to report high numbers of daily fatalities.

The country has reported at least 1000 deaths per day for most of the past six weeks, pushing the US death toll far beyond what officials optimistically predicted in the early stages of the pandemic. 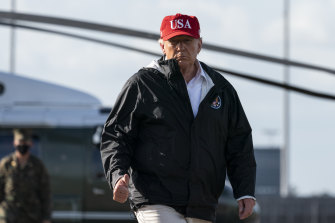 US health bureaucrats fear the coronavirus crisis is being used for political purposes ahead of the November election.Credit:AP

Coronavirus infections are rising sharply at the University of Alabama, where school officials have reported more than 1000 cases since classes began August 19. The outbreak is one of the largest coronavirus clusters reported at any educational institution since the start of the new academic year.

Infections trended upward over the past week in Iowa, Kansas, Nebraska, Minnesota and the Dakotas, and have flatlined in Illinois and Wisconsin, according to The Washington Post's tracking. North Dakota reported a single-day record of 374 cases on Saturday. In Iowa, daily infections have topped 1000 for three days straight.

Demoralised staff at the Food and Drug Administration say a misleading announcement on convalescent plasma undermined scientists' credibility and turned the agency into a prop in US President Donald Trump's re-election campaign.

Deaths lagged behind the increase in cases across the US South and West by several weeks but started rising in early July. Earlier in the pandemic, deaths followed infections more closely. Health experts say the longer time lag is probably the result of expanded testing, earlier diagnoses, and young, healthy people passing the virus on to older, more vulnerable adults, who die later of their infections.

The rolling average for new daily cases has declined slightly over the past week, with 46,473 new cases reported Saturday. The total number of cases reported in the United States is on track to exceed 6 million by early this week.

Record number of infections in India

India announced a record number of coronavirus infections for a single day as the world's second-most populous nation becomes the latest epicentre of the pandemic.

As many 78,761 new cases were reported on Sunday, according to data from the health ministry. The US had set the previous highest number for a single day at 77,638 on July 17, according to Agence-France Presse. 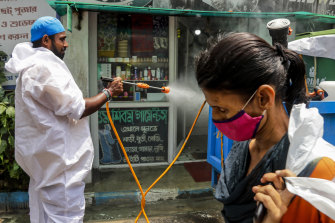 Infections continue to rise in India.Credit:AP

From a former president to multiple ministers in Prime Minister Narendra Modi's cabinet, the virus has spread further from India's biggest cities to its vast hinterland, where most of the population lives and health infrastructure is mostly archaic. India has the most number of confirmed cases worldwide after the US and Brazil, while it's fourth in the overall list of deceased.

With one of the world's fastest-growing epidemics but also one of the lowest testing rates, India in late June started to use quick antigen tests to ramp up detection. But the tests, which can report false negatives as much 50 per cent of the time, threaten to obscure the true picture of its outbreak, further challenging containment efforts.

Between 25 per cent and 30 per cent of the country's daily tests now are rapid antigen tests, Balram Bhargava, the director general of the Indian Council of Medical Research (ICMR), told reporters at a briefing in New Delhi. It was the first time India's premier research group had broken down the testing data – the ICMR's website still does not specify what type of tests are being done in its daily data.

Despite the surge in recent weeks, India continues to ease the restrictions as the economy faces the biggest contraction in four decades. The government announced new reopening steps on August 29 that includes permitting metro rail services to resume in a graded manner from September 7, and barring provinces from local lockdowns other than in containment zones.

Infections up in France

France reported 5413 new confirmed coronavirus cases on Sunday, slightly down from the 5453 seen on Saturday.

The health ministry said the cumulative number of COVID-19 deaths rose to 30,606 from 30,602 reported on Saturday.

The number of people in hospital with the disease was 4535 versus 4530 the day before and the number in intensive care rose to 402 from 400.

"In mainland France, the progression of the COVID-19 epidemic is exponential. The strong growth dynamics of transmission is very worrying." the ministry said in a statement.

The most important news, analysis and insights delivered to your inbox at the start and end of each day. Sign up to The Sydney Morning Herald’s newsletter here,  The Age’s newsletter here, Brisbane Times‘ here and WAtoday’s here.

END_OF_DOCUMENT_TOKEN_TO_BE_REPLACED

END_OF_DOCUMENT_TOKEN_TO_BE_REPLACED
Recent Posts
We and our partners use cookies on this site to improve our service, perform analytics, personalize advertising, measure advertising performance, and remember website preferences.Ok