US Justice Department’s China focus likely to continue under Biden

Washington: US President Donald Trump has identified China as the country's biggest foe and the Justice Department mirrored that emphasis over the last four years with a drumbeat of cases against defendants ranging from hackers accused of targeting intellectual property to professors charged with grant fraud.

But even after Democrat Joe Biden's administration arrives, the law enforcement focus on China may not look radically different, in part because of actions by Beijing that US officials, lawyers and analysts say run afoul of international norms. 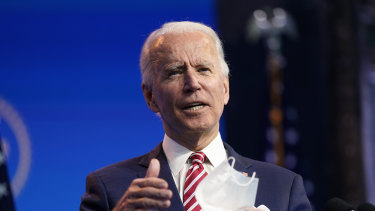 Even if the anti-China rhetoric is cooled in the White House, cases against agents of the Chinese government may well continue apace, especially since some of the focus — including against trade-secret theft — preceded the Trump administration.

“I think this is going to continue because it’s not really up to the US. It’s the Chinese who are being really aggressive,” said James Lewis, a senior vice president at the Centre for Strategic and International Studies.

The Justice Department in 2018 launched what it called the China Initiative to combat what officials saw as a multi-pronged effort by Beijing to steal intellectual property and conduct foreign influence operations in the US.

It was part of an administration-wide focus on China, which accelerated in the last year as Trump blamed the country for the spread of the novel coronavirus and as leaders of multiple agencies, including Secretary of State Mike Pompeo, delivered speeches blasting Beijing. 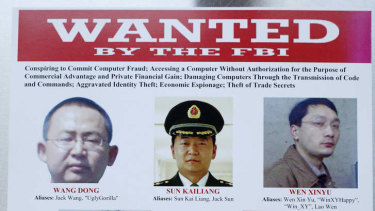 Chinese hackers charged with economic espionage and trade secret theft are shown in a wanted poster.Credit:AP

“There is no turning back the clock to an era when free market liberal democracies turned a blind eye to the PRC’s theft of intellectual property, appetite for sensitive personal data, and repression and censorship,” John Demers, assistant attorney general for national security, said in a statement, referring to the People's Republic of China.

“The Department’s commitment to disrupt the illegal and predatory Chinese activity aimed at America and its allies, as illustrated in prosecution after prosecution, will not waver," he added.

President-elect Biden referred to China during the campaign as a “serious competitor.” As president, analysts expect him to make few major changes to US policy in conflicts with China over trade, technology and security amid widespread frustration with Beijing’s trade and human rights record and accusations of spying and technology theft.

The Trump administration's emphasis on China opened the president to criticism that he was trying to deflect attention away from Russia, which had interfered in the 2016 presidential election and which officials and experts regarded as the bigger threat for meddling in this month's election.

The Justice Department, for its part, did keep an eye on Moscow, unsealing an indictment last month that accused six Russian military officers in a global hacking campaign.

But most of the department's high-profile actions have centred on China.

FBI Director Chris Wray has said the FBI opens a Chinese counterintelligence case about every 10 hours. The Justice Department says it has charged more than 10 trade-secret theft cases tied to China since the China Initiative began.

In the last year, prosecutors charged Chinese hackers they said were working with the government with targeting companies working on coronavirus research, and accused others in a major hack of Equifax. The US government also closed China's consulate in Houston in July and charged six people in recent months with studying in the US while hiding ties to People's Liberation Army military institutes.

A particular area of emphasis has been on American college campuses and research institutions, where dozens of academics working in the US have been charged in cases that often accuse them of failing to disclose research grants they had received from universities in China. A persistent concern is that talent recruitment programs linked to the Chinese government are enticing academics to steal research from American universities for Beijing's economic benefit.

To be sure, the Justice Department had begun a focus on Chinese hackers well before Trump took office. It brought a first-of-its-kind indictment in 2014 against five Chinese military intelligence officers, accusing them of hacking into major American corporations to siphon corporate secrets.

The next year, President Barack Obama and Chinese President Xi Jinping announced that their countries had agreed not to conduct or support hacking for economic espionage. But China's activities continued.

“I think there is broad consensus that individuals who engage in grant fraud and who fail to disclose foreign ties in violation of US law pose a real risk to our intellectual property in the US and to the integrity of our federal grants process,” said Justin Danilewitz, a former federal prosecutor and Philadelphia attorney.

“Regardless of what side one is on politically, I think that is going to continue to receive a lot of focus and attention," he said.

END_OF_DOCUMENT_TOKEN_TO_BE_REPLACED

END_OF_DOCUMENT_TOKEN_TO_BE_REPLACED
Recent Posts
We and our partners use cookies on this site to improve our service, perform analytics, personalize advertising, measure advertising performance, and remember website preferences.Ok