Vaccine sites have officially opened to every Victorian over the age of 50, as health authorities move to reassure those wary of the AstraZeneca vaccine to speed up the roll-out.

From 7.30am six mass vaccine sites across the state began inoculating those over 50. Another site was due to open in Cranbourne on Tuesday morning. Including smaller sites, there will be 22 sites in total open to the eligible public from today. 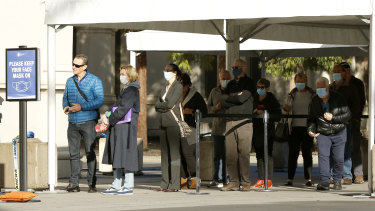 The Royal Exhibition Building in Carlton is one of seven mass vaccination hubs opening to over 50s this week.Credit:Getty

Chief Health Officer Brett Sutton took to Twitter on Sunday night urging Victorians to book in for a vaccine.

“This ain’t a race or any, but c’mon Victoria, let’s get vaccinated. It’s our path to safety,” he wrote.

“I understand some are hesitant and no one wants to confront a severe side effect, even if vanishingly rare. But the ongoing threat of COVID is real, so – for the willing and eligible – please get vaccinated now.”

People aged over 50 are being vaccinated sooner to speed up the delayed vaccine program, which was dealt a significant blow after the country’s top immunisation experts recommended the AstraZeneca jab not be given to people aged under 50 because of a rare but serious blood clotting condition.

Professor Nigel McMillan, head of Griffith University’s infectious diseases and immunology program, said governments had a difficult task ahead of them to convince people, but believed it would get easier over time.

“[People are] basically saying ‘look, there’s no virus around so our risk of getting it is very, very low and therefore I’m going to wait a little bit to see if there’s a better vaccine or another vaccine that comes along’,” he told radio station 3AW.

“If we were in a situation like India or the UK or America even you’d see people getting the vaccine at much higher rates I’m sure because the danger of course is immediate.

“I think you’ve just got to keep showing that the more people get it, and then they know a friend or neighbour who’s got it and there’s been no problem and no issues, then I think you’re slowly going to break those barriers down. But it’s a difficult problem to overcome.”

Chief Medical Officer Professor Paul Kelly said Monday was a big day in the nation’s vaccine rollout, and assured the new cohort now eligible for vaccines wouldn’t compromise vaccines available for those in 1A and 1B categories who remained unvaccinated.

“The 1A and 1B continues. In every state and territory they remain our priority groups because they’re frontline and at highest risk of either severe disease or being exposed to the virus and so that absolutely has to continue and including, in particular in our quarantine workers,” he told ABC’s Radio National.

Vaccines are available from state-run sites from today, while GPs will be able to administer the vaccine to over 50s.

“GPs that are eligible, they’ll be calling you,” Professor Kelly said.

“If you’re in their practice, they’ll be calling you.”

Phone bookings are encouraged at all the sites by calling 1800 675 398, and selecting option 3, option 2, option 2. For more information about the locations and vaccines, visit coronavirus.vic.gov.au/vaccine.