Venice tourist backlash: ‘This is NOT Disneyland’ Angry protest at cruise ships in lagoon

Thousands of Venetians flooded the city centre to protest against the transit of big cruise ships in the narrow strait dividing mainland Venice from the Giudecca, an island in the Venetian Lagoon famous for the Church of the Santissimo Redentore. Demonstrators were given the go-ahead by the city’s prefect to march across Venice and enter Piazza San Marco, an area closed to demonstrations since 1997.

The protest was peaceful, with people holding flags of the historic Venetian Republic and banners reading “Never again! Ships out of the lagoon!” and “Venezia is not Disneyland”.

The protest, launched by a group called No Big Ships (No Grandi Navi), comes after a big cruise ship clashed against a dinghy carrying tourists in the lagoon, injuring four people and throwing others in the surrounding waters.

The transit of these cruise chips so close to the mainland allows tourists to see iconic Piazza San Marco from an advantage point of view – at the expenses of the environment, the naval traffic and Venetians’ quality of life, according to protesters. 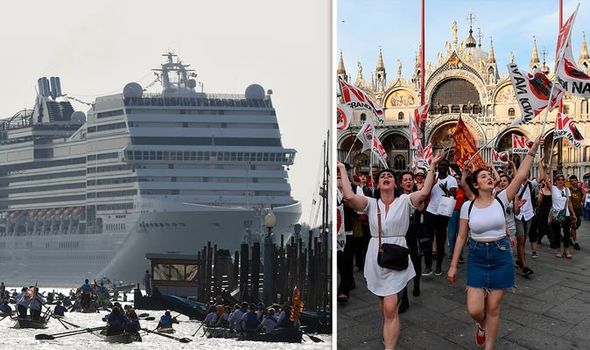 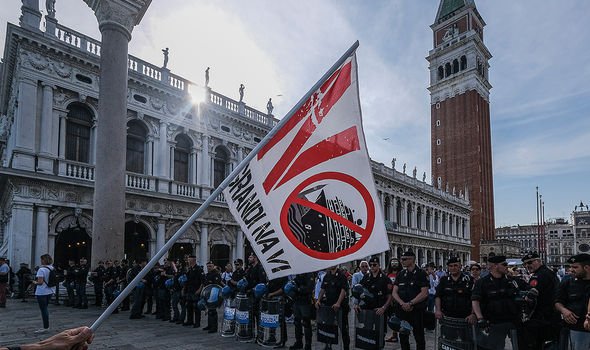 Tommasi Cacciari, the leader of the protest, said: “These ships must be stopped now and we want to show our concern in the heart of our city.”

Another leader of the protesters, Gianfranco Bettin, said: “These giants must leave the lagoon.

“They are incompatible with the balance of our ecosystem, and they are dangerous for our city.”

A decree published in 2012 forbids these ships to transit through the lagoon – but vessels are still allowed to enter the waters thanks to a derogation, which No Big Ships now wants to see axed. 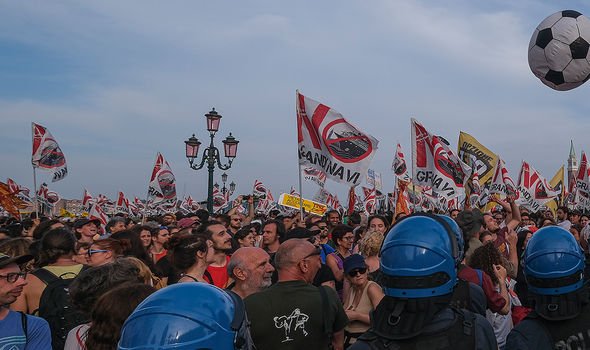 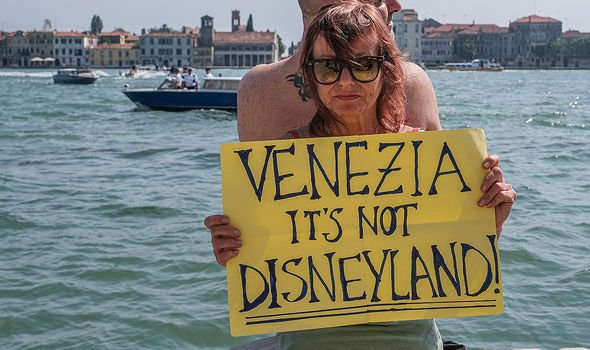 Ahead of the march, protesters demanded to be allowed to enter Piazza San Marco, one of Venice’s landmarks where is situated the San Marco’s Basilica.

The area has been barred to protesters after activists of the so-called Venetian Most Serene Government, a movement calling for the independence of the Venetian lands, occupied for more than eight hours Piazza San Marco and the Basilica’s bell tower in a shocking move in 1997.

The prefect eventually caved in and agreed to allow No Big Ships protesters into the square after demonstrators pointed out that, since the cruise ships have been enjoying daily derogations to the law, the city council could also let them enter Piazza San Marco for an exceptional reason.

The spokesman for No Big Ships, Luciano Mazzolin, added: “Allowing us to enter San Marco has marked a great victory for us.”