Victorian Premier Daniel Andrews said the state was too “swamped" by the first wave of the pandemic to consider contact-tracing technology it is now embracing to help contain further outbreaks. 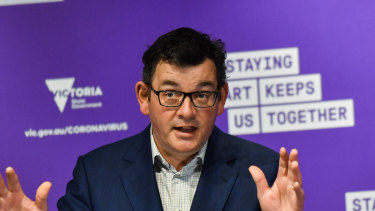 Premier Daniel Andrews says Victoria was “swamped” by the first wave of the pandemic when it was first approached by SalesForce.Credit:Joe Armao

The Premier also confirmed that Victoria rejected an approach by Salesforce early in the pandemic.

“Sometimes, when you are swamped, it is not a great time to move to a new IT platform," Mr Andrews said.

The technology has been used for several months in Western Australia, South Australia and New Zealand and also supports contract tracing in 35 US jurisdictions.

This will mean that notification of new positive COVID-19 tests, details of cases and information about people they might have infected will be contained within a single system.

It will also enable automated messages to be sent to people who test positive and those considered close contacts, saving critical time in the process.

Salesforce COVID-19 contract-tracing management software is already being used in Victoria by infrastructure company Acciona at one of the government’s signature, level-crossing removal construction sites to support the daily virus screening of all workers.

Victorian Chief Health Officer Brett Sutton confirmed the company first approached Victoria in March, when the focus of all states was on slowing the spread of the virus and building COVID-19 capacity in hospitals and intensive care units.

He defended the five-month delay in supporting Victoria’s testers and contact tracers – the state's frontline defence against the virus – with a modern IT system.

Modelling produced by the Doherty Institute indicated that without significant COVID-19 restrictions, Victoria would have faced 58,000 cases at the peak of the second wave.

Mr Andrews said the new IT system was being installed in parallel with the existing one so that no critical information fell through the cracks.

END_OF_DOCUMENT_TOKEN_TO_BE_REPLACED

END_OF_DOCUMENT_TOKEN_TO_BE_REPLACED
Recent Posts
We and our partners use cookies on this site to improve our service, perform analytics, personalize advertising, measure advertising performance, and remember website preferences.Ok