Is THIS what lockdown boredom does to people? Social media is flooded with videos of housebound Britons dancing to BBC News theme tune – as hilarious routine by three women clocks up one million views on Tik Tok

Social media has been flooded with videos of a new TikTok lockdown craze – housbound Britons dancing to the BBC News theme tune.

Hot on the heels of the Sea Shanty fad – where users sang renditions of traditional folk songs – comes a new idea, with a hilarious routine by three women already clocking up more than a million views on the video platform.

Katie Wong, 31, a freelance broadcast journalist who ironically works for BBC News in London, posted the clip of her and dance pals Amy Lester and Thao Therese Nguyen on TikTok earlier this week.

The video opens with the three women acting casually, as Katie bends down to tie her shoelaces, Amy hilariously sniffs her armpit and Thao stands with her hand on her hip.

But as the familiar BBC News theme starts to pulse, the girls launch into action – cutting shapes high and low in their perfect matched movements. 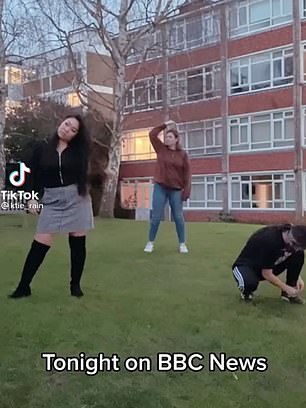 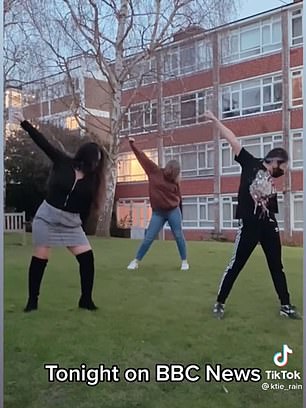 The video opens with the three women acting casually, as Katie bends down to tie her shoelaces, Amy hilariously sniffs her armpit and Thao stands with her hand on her hip (left). But as the familiar BBC News theme starts to pulse, the girls launch into action – cutting shapes high and low in their perfect matched movements (right) 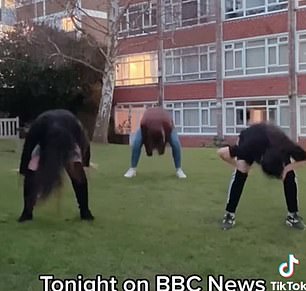 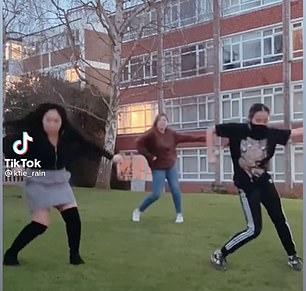 They continue to dance in time to the beat (left and right), ending the video in a dramatic pose as the tune reaches its climax

They continue to dance in time to the beat, ending the video in a dramatic pose as the tune reaches its climax.

The trio say they are ‘overwhelmed’ by the sudden success of the video which has attracted more than a million views on the platform.

Others have taken an inspiration and performed their own routines this week, and it’s not the first time the BBC theme has provided the soundtrack to a viral meme.

Elsewhere, Rachel Leary, a beauty and make-up influencer from Surrey, turned DJ to create a comedy clip of her hosting a rave in her kitchen to the thumping beat of the introduction score.

Meanwhile, This Country’s Daisy May Cooper has had viral hits with her videos of dancing to the Eastenders theme tune and the Countdown clock music,

After gaining well over 100,000 likes, Katie’s video has been shared far and wide across social media.

Katie’s TikTok bio now describes herself as ‘the girl who thought she was too old for Tiktok, but is now viral on Tiktok’. 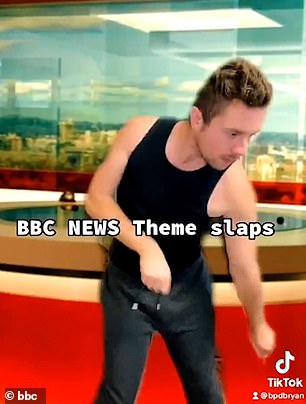 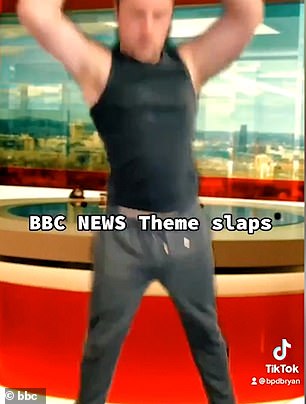 Others have taken an inspiration and performed their own routines this week, pictured left and right

Speaking today, Katie said that she, Thao and Amy were both delighted and ‘taken aback’ by the huge response: ‘We thought we’d just have a go at doing something easy and fun.

‘When I put it up it was quite late and the last time I looked at it before I went to bed it had zero views.

‘I only downloaded TikTok recently, literally had zero posts on there and one follower – which was my cousin.’

Thao, a professional performer, dancer and dance teacher, has taken the lead on choreographing the eclectic routines – enjoyed as a hobby by personal assistant Amy and Katie.

Katie explained that the group’s idea for the video came after seeing other clips of funny, choreographed dances to unexpected tunes appear on social media.

She said: ‘At first we were going to copy someone else’s trend, but actually thought ‘we have our own idea so let’s just do it.’

The group were spurred on to try choreographing to the BBC News theme tune after Katie remembered a colleague once calling the Channel 4 News theme a ‘tune’ and dancing to it on the spot.

‘I remembered that moment for so many years, so I said to [Amy and Thao] that we should dance to the news titles!

‘Now that people are following me and it’s become so big, I’ve suddenly taken it upon myself to become the ambassador of dancing to news titles.’ 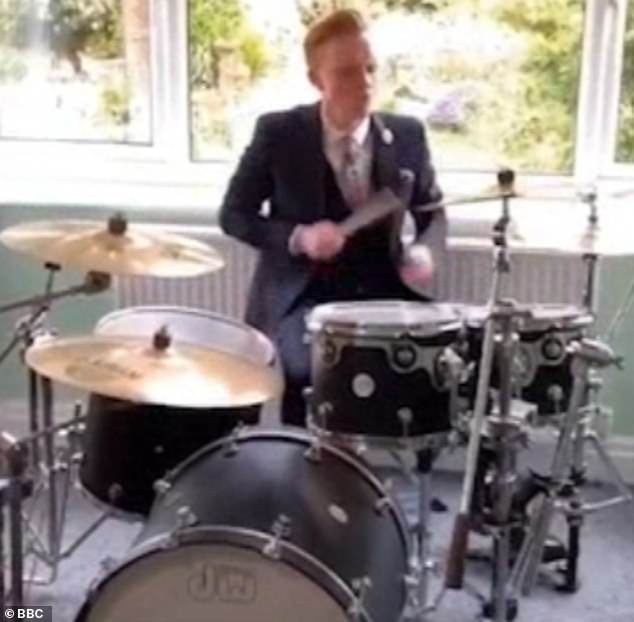 Owain Wyn Jones, 36, is seen finishing his weather report before dashing inside to play the drums to accompany the BBC News theme song

Katie added: ‘We thought we’d go through all of the news broadcasts – ITV News, Channel 4 and so on.’

‘Once we’ve run out of British broadcasters we’ll definitely branch out to international ones. We’ve already had a request for NBC News.

‘I have to say, though, that the Channel 4 News one is my favourite.’

On TikTok, users showed their love for the video and put in their requests for more of the quirky dance covers.

@the.angel.in.hell asked: ‘Can you do ITV’s News at Ten?’

Another user, @raika258, commented: ‘I can’t count how many times I’ve watched this. It’s too many times’

News anchors and journalists also shared the video on Twitter.

@timoncheese said the clip and tweeted: ‘If you find the news a bit glum lately do this dance when BBC News comes on to inspire joy’