WA’s path to freedom is being dictated by 250,000 people yet to get the jab

It was less a much-anticipated roadmap than a plan for a plan.

Premier Mark McGowan has decided to put the freedom of movement of 2.7 million West Australians in the hands of 250,000 people who so far – whatever the reasons – have declined the abundant opportunity to be vaccinated. 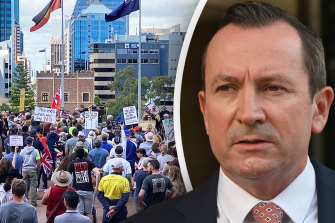 Rather than a road map, the Premier announced a series of preconditions for further decisions.

Those preconditions are: that at 80 per cent vaccination coverage for those aged 12 and over, expected some time in December, the WA Government will project forward a date where it believes 90 per cent will be vaccinated, likely in late January or early February.

Once that second date is set, the Premier said, it will not be changed.

At that point, interstate and international borders will be reopened, with the whole apparatus of additional COVID-related impositions remaining in place.

It will still be compulsory to obtain a police-approved G2G pass to enter the state.

Negative COVID tests will need to be recorded before departure and after arrival.

Blessedly there will be no requirement for double-vaxxed travellers to quarantine. That last measure, of course, came into effect in NSW and Victoria on Monday.

Though there is a caveat. If vaccination rates are not high enough in parts of regional Western Australia, intrastate borders could be reintroduced, which seems absolute absurdity.

Never mind Josh Frydenberg’s old line about being able to travel to Paris before Perth (which of course is now reality) – what if you could go from Perth to Paris but not the Pilbara?

Ahead of the announcement the Premier said repeatedly that he wanted a “normal” Christmas but for people with family ties in Australia’s most populous states and overseas it will be anything but.

Businesses who compete for national and global talent, or for international students, will see those opportunities flow to freer jurisdictions.

Ninety per cent is a fantastically high hurdle that no comparable jurisdiction has used as a precondition for reopening. Can it be achieved, without a NSW-style outbreak to drive uptake?

Vaccine Commander Chris Dawson said as recently as three weeks ago that he had “not insignificant concerns about the last 20 per cent”.

“I think there are, on our research, in the order of 4 to 5 per cent of people who have made their minds up they are not going to get it,” he said. “What I am chiefly concerned about … is that about 55 per cent of the population are just presently hesitating or waiting until the disease arrives in the community and saying, ‘I will do it then’.”

McGowan has made West Australian exceptionalism official policy, saying there is a globally unique opportunity to transition from COVID-free to open borders with very high levels of vaccination.

That’s true, but at what cost? And at what incremental benefit?

From almost as soon as they were agreed at National Cabinet, McGowan began trashing the Doherty thresholds of 70 per cent and 80 per cent of the over-16s.

Under the 80 per cent modelled scenario, peak ICU occupancy would be 32 beds versus 8 under 90 per cent.

WA has a $5.6 billion surplus and the luxury of 18 COVID-free months to prepare.

Why WA’s modelling is superior to Doherty’s model, or any other COVID modelling which, no matter how expert, has been reliably too pessimistic everywhere including NSW and Victoria’s current outbreaks, has not been explained.

“I don’t want that on my conscience,” the Premier said of the “extra” 200 deaths.

That was the most telling line, showing just how the state’s response is driven by fear.