A government report into the partial collapse of the Toddbrook Reservoir dam – which led to the evacuation of the nearby village of Whaley Bridge – has been released so heavily redacted that entire pages are nothing but swathes of black ink.

The Canal and River Trust cited concerns over national security for the black-wash of its report but was ridiculed by residents and challenged by media organisations.

On August 1, 1,500 residents of Whaley Bridge in Derbyshire were ordered to leave their homes amid fears the reservoir would burst and flood the village.

Emergency service workers scrambled to pump out 300 million gallons of water after a wall around the reservoir was damaged and a huge hole appeared in it, threatening to wipe out the Peak District village.

Residents, who had to spend almost a week away from home, furiously pointed out they had previously raised concerns about the upkeep of the dam, which had been photographed with vegetation sprouting from the concrete of the spillway.

They, along with the BBC and other media outlets, demanded to see a report into the condition of the dam, completed following an inspection by the Canal and River Trust in November 2018, and by an independent inspecting engineer.

Large sections of the copies received by the media were completely blacked out. 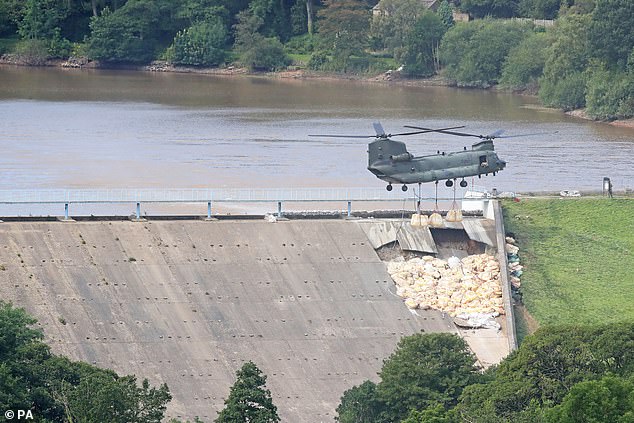 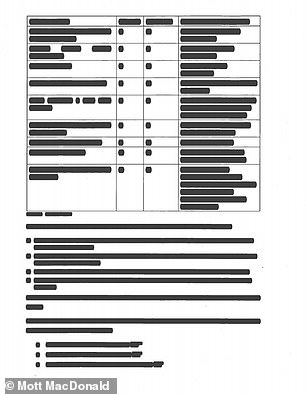 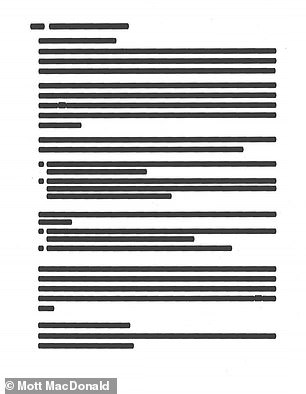 The Canal and River Trust report, written following a 2018 inspection, has been released so heavily redacted as to be almost meaningless 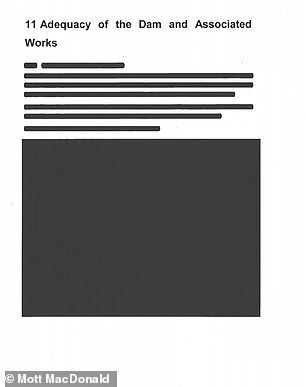 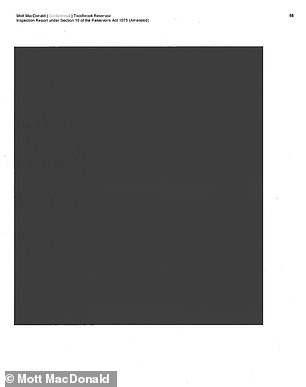 Matthew Forrest, who has been among a group of residents to have called for a public inquiry and criminal investigation, told the BBC the redactions seemed ‘ludicrously heavy-handed’.

He said: ‘The population of Whaley Bridge had very little confidence in the Canal and River Trust as things stood after the near disaster in August that could have potentially killed thousands of people.

‘This nonsensical black hole of a document does little to build upon any remaining confidence and faith in the Canal and River Trust to internally investigate the causes, let alone replace the neglected Toddbrook Dam.’

Information left in the Canal and River Trust report includes dates when the reservoir was inspected, but measures that were taken ‘in the interests of safety’ and ‘matters specified to be watched by the supervising engineer’ have been redacted.

The Canal and River Trust told the BBC it had redacted information on the basis of ‘national security and public safety’, adding that there was ‘a high level of public interest in not releasing information that would result in a threat to public safety’. 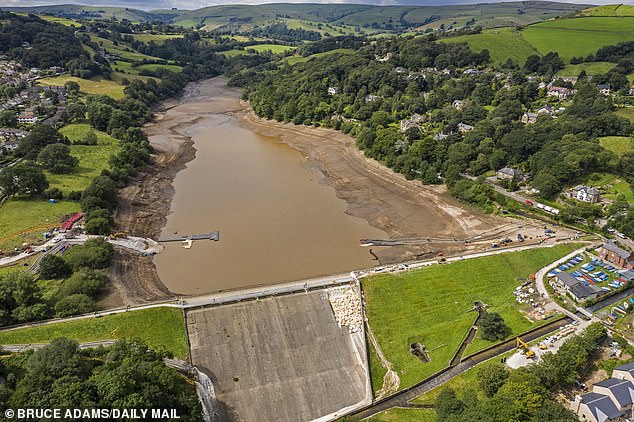 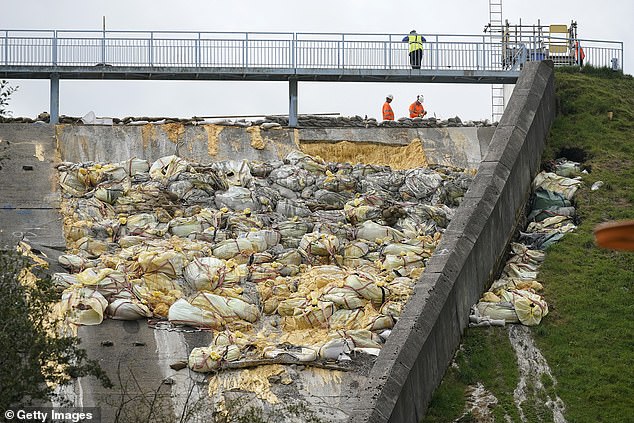 Approximately 1,500 residents of the town’s 6,500 population were forced to leave their homes at the beginning of August, as emergency crews worked to shore up the dam

It went on: ”If the trust were to release copies of these reports, which were not redacted, it would be releasing key details of the infrastructure and potential vulnerabilities of the Toddbrook Reservoir.

‘This would prejudice the protection and safety of the public through potential damage or disruption to the national infrastructure by acts of sabotage.’

Today the trust told MailOnline: ‘Following the lead of the Environment Agency we have now made available last November’s inspection report into Toddbrook Dam.

‘For national security reasons laid down by the Agency, the regulator in England and Wales, the report has had to be heavily redacted. We understand the frustration but are obliged to follow national guidelines on this which are exactly the same for any other of the nation’s 2,000 plus reservoirs.

‘However we want to reassure people the report did not identify the need for any immediate repairs to the spillway. We remain committed to being open and have just organised a series of public open days for local residents to visit the dam and find out more.

‘Both the Government and the Canal & River Trust are currently carrying out independent inquiries into what happened and we expect both reports to be available in the coming months.’

Residents pointed out that the reservoir has been drained, which meant there would be no flood risk even if someone was to sabotage it.

‘Surely they [CRT] must have realised the farcical nature of distributing a 90% blacked out report?’ Mr Forrest said.

‘Some may speculate that they have done it in order to quash any further inquiry.’

Taika Waititi is playing games with Marvel fans by sharing a fake script from the upcoming movie Thor: Love and Thunder. The Oscar-winning filmmaker is returning to direct the fourth movie in the Thor franchise and he jokingly teased that Robert Downey Jr.‘s Tony Stark would be returning for the

END_OF_DOCUMENT_TOKEN_TO_BE_REPLACED

Madonna, who has been posting bizarre video diary updates of herself in quarantine, said on Thursday that three friends have passed away in the last day. In her latest video, which shows her sitting in a darkened room at a typewriter while jazzy guitar music plays in the background, the

END_OF_DOCUMENT_TOKEN_TO_BE_REPLACED

Vanessa Bryant continues to celebrate the legacy of her late husband, Kobe Bryant, who tragically died along with their daughter Gigi in a helicopter crash in January. The 37-year-old wife of the late NBA icon posted an update for fans regarding the success of his newly released book, The Wizenard

'Tiger King': How Many Wives Does Doc Antle Really Have?

It’s been weeks since Tiger King: Murder, Mayhem, and Madness was released on Netflix, but many of us are still trying to digest all of

During the episode, the mother of three also opened up about plans that her family has had to put on hold due to the pandemic

As a society, we’ve rarely needed streaming distractions more than we do right now. Thankfully, Netflix still reigns supreme, and for the month of April,

U.N. Security Council meets over coronavirus as it struggles to act

NEW YORK (Reuters) – The United Nations Security Council met for the first time on Thursday to discuss the coronavirus pandemic as the 15-member body – charged with maintaining international peace and security – struggles to agree on whether it should take any action. U.N. Secretary-General Antonio Guterres privately briefed

END_OF_DOCUMENT_TOKEN_TO_BE_REPLACED

Sir Peter Viggers who came to personify MP expenses scandal when he claimed £1,645 for his ornamental floating duck island has died aged 82 The former Conservative Gosport MP resigned after claiming for a ‘duck island’  It also emerged he had filed receipts for a further £30,000 in gardening costs Sir

END_OF_DOCUMENT_TOKEN_TO_BE_REPLACED

We all know how it goes. Someone posts something on social media. PC mobs deliberately misinterpret the meaning. Evil intention is attributed where none exists. The poster is “canceled” — and often forced to pay a real-life price. The coronavirus hasn’t put a stop to this — if anything, the

END_OF_DOCUMENT_TOKEN_TO_BE_REPLACED
Recent Posts
We and our partners use cookies on this site to improve our service, perform analytics, personalize advertising, measure advertising performance, and remember website preferences.Ok