Brave Afghan women take on the Taliban: Protesters against female university ban are cut down by water cannons and endure a barrage of taunts as men leave exams in solidarity

Footage posted on social media has shown female protesters in the city of Herāt getting blasted by water cannons as they protest against the ban on female university students, implemented last week.

In the video a woman crashes to the floor after being hit by a jet of water as a group of women stand at the side of a building waving their hands.

In another video, also circulating online and posted today, female students enter a classroom to encourage male students to walk out of their university exams in protest of the Taliban’s university ban.

A group of women are then seen walking up to confront members of the Taliban on a road. 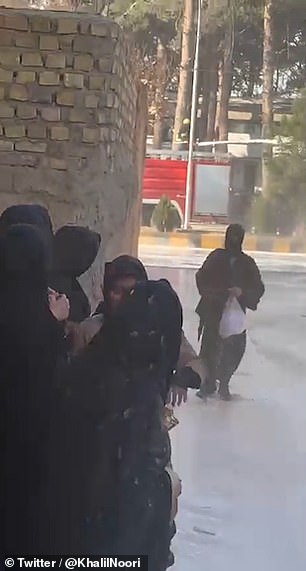 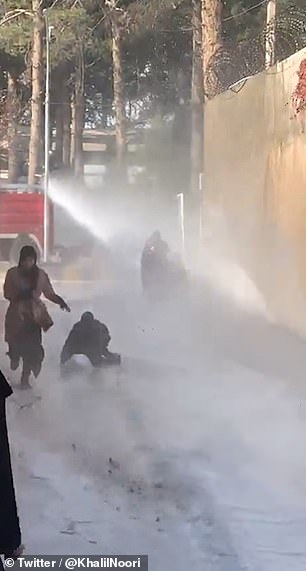 Footage posted on social media has shown female protesters in the city of Herāt getting blasted by water cannons as they protest against the ban on female university students, implemented last week. In the video a woman is brought to the floor by a jet of water as a group of women stand at the side waving their hands 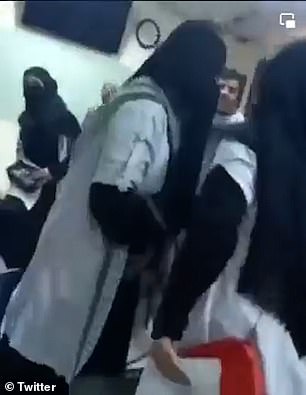 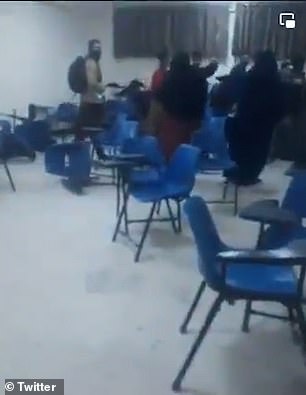 In another video, also circulating online and posted today, female students enter a classroom to encourage male students to walk out of their university exams. This is in protest of the Taliban’s ban 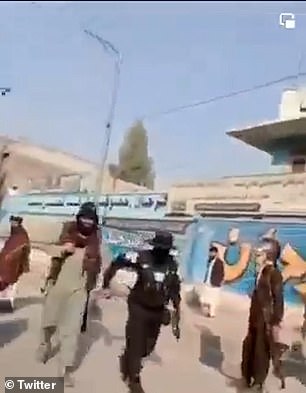 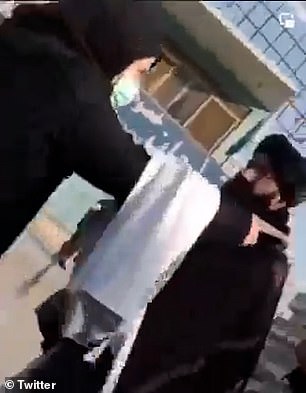 A group of women are seen walking up to confront members of the Taliban on a road. The university ban has caused fury since being implemented last week

Meanwhile, an 18-year-old Afghan student endured Taliban taunts and insults at the weekend as she staged a solo protest, also against the ban on women attending university.

‘For the first time in my life, I felt so proud, strong and powerful because I was standing against them and demanding a right that God has given us,’ Marwa told AFP, asking not to be further identified.

Women-led protests have become increasingly rare in Afghanistan since the Taliban’s return – particularly after the detention of core activists at the start of the year.

But Marwa was adamant. 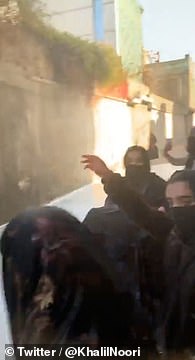 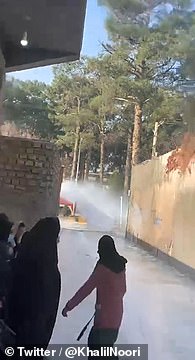 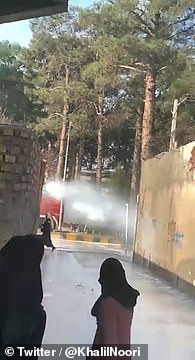 Her sister shot a video of the silent protest with a phone from a car as Marwa held up a poster just metres from the entrance to the Kabul University campus, the country’s biggest and most prestigious institution.

Some women have tried to protest the university ban, but they have been swiftly dispersed. 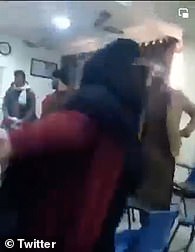 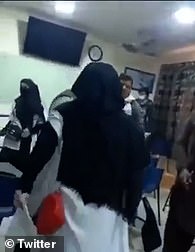 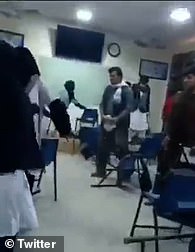 On Sunday, in front of Taliban guards deployed at the Kabul University gates, Marwa courageously carried a placard that read ‘Iqra’, the Arabic word for ‘read’.

‘They said really bad things to me, but I stayed calm,’ she said.

‘I wanted to show the power of a single Afghan girl, and that even one person can stand against oppression.’

‘When my other sisters (women students) see that a single girl has stood against the Taliban, it will help them rise and defeat the Taliban,’ Marwa said. 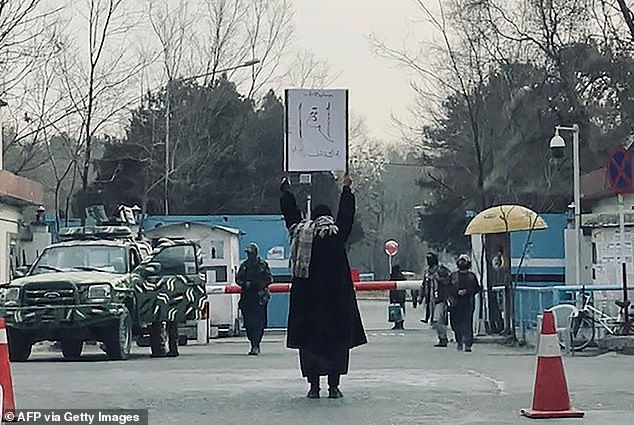 Pictured: Student Marwa protests alone against the ban on women’s higher education, outside the Kabul University as members of Taliban stand guard in Kabul on December 25, 2022 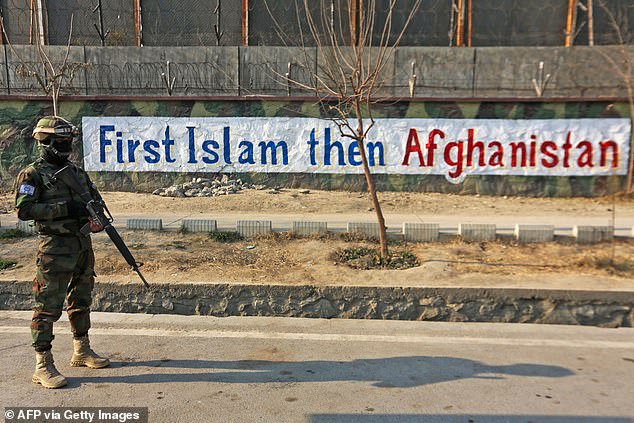 Pictured: A Taliban fighter stands guard along a street in Kabul on December 27, 2022

While the Taliban promised a softer form of rule when they returned to power in August last year, they have instead imposed harsh restrictions on women – effectively squeezing them out of public life.

On Saturday, authorities ordered all aid groups to stop women employees from coming to work.

Secondary schools for girls have been closed for over a year, while many women who lost their government jobs are being paid a fraction of their salary to stay at home.

Women have also been barred from going to parks, gyms and public baths.

The Taliban say the restrictions are because women are not observing a strict Islamic dress code, including wearing hijabs. 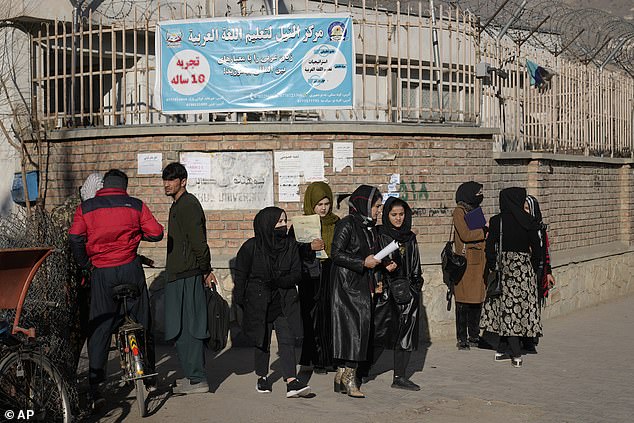 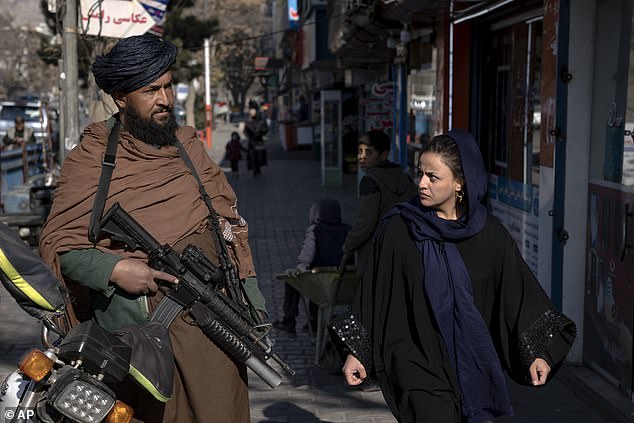 Pictured: A Taliban fighter stands guard as a woman walks past in Kabul, Afghanistan, on December 26, 2022

The country has become a prison for women, said Marwa, who dreams of becoming a painter.

‘I don’t want to be imprisoned. I have big dreams which I want to achieve,’ she said.

‘That’s why I decided to protest.’