Home » World News » ‘We are seriously behind’: Health authorities fret over vaccine supply

‘We are seriously behind’: Health authorities fret over vaccine supply

At least five mass vaccinations clinics at Victorian hospitals and landmarks are set to open to eligible members of the public, allowing delivery of the AstraZeneca vaccine to tens of thousands of Victorians every week.

But in an exclusive interview with The Sunday Age, the head of the Victorian Health Department’s vaccine program, Professor Ben Cowie, said while authorities anticipated the Commonwealth would provide enough doses for this task by next month they were “not actually sure of it”. 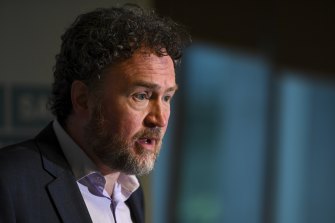 “It is a challenging planning environment to be trying to scale up to something highly ambitious,” the infectious diseases expert said.

“But by the same token, we don’t want to stand up a huge workforce and all of this capacity in terms of logistics and sites, and then not have enough vaccine to distribute.

It comes as experts including former secretary of the Commonwealth Department of Health Professor Stephen Duckett describe delays to Australia’s vaccine rollout as significant.

“We are seriously behind,” said Professor Duckett, health program director at the Grattan Institute. “The [federal] government said they’d do 4 million [doses] by the end of this month and they’ve done less than 100,000.”

A meeting between leading state and federal officials has been scheduled for next week in an attempt to resolve questions around supply, logistics and distribution, according to the Victorian government.

As of early this week, there had been 86,369 vaccinations delivered across the country. Just over 72 per cent of those had been given via state-run clinics, and the remaining by the Commonwealth, in aged and disability care.

In Victoria, there have been more than 30,000 doses administered at hospital-run clinics, including more than 80 per cent of the state’s hotel quarantine workers. Victorian authorities say they are well on track to meet their goal of 40,000 doses within the first four weeks of the program.

A crucial test for Australia’s rollout will come from Monday, March 22, when mass deliveries of the locally manufactured AstraZeneca vaccine are set to begin, kicking off phase 1b of the program, which will see all Australians aged over 69 eligible for a jab.

A spokeswoman for federal Health Minister Greg Hunt said the Victorian state government had been given 38,610 Pfizer vaccines and 50,800 AstraZeneca vaccines as of Thursday, with a further 23,400 Pfizer doses set to be delivered on Sunday.

Some of these doses are kept aside to ensure supplies for second doses.

By the end of March it’s expected that with a number of mass vaccination clinics Victoria will have capacity to vaccinate 10,000 people each week. Large-scale centres have been planned at the Royal Exhibition Building, Melbourne Convention Centre, the old Ford Factory in Geelong, Sunshine Hospital car park and a function area of the Heidelberg Rehabilitation Hospital.

The slow start to Australia’s vaccination program has been partly blamed on delays to international shipments of both the Pfizer and AstraZeneca vaccines, but Professor Duckett said he understood there were 700,000 doses in the country and cited a failure of logistics to deliver more.

World Health Organisation officials have said Australians are still vulnerable to coronavirus and needed vaccines just as much as those in countries experiencing severe outbreaks.

A federal Health Department spokeswoman said states and territories had been provided with an indication of the allocations of the vaccines they would receive to the start of April.

University of South Australia epidemiologist Professor Adrian Esterman believes it won’t be a major problem if the vaccine rollout isn’t complete until the end of the year.

But he said the news that a Brisbane doctor who had coronavirus after treating two COVID-positive patients had not been vaccinated highlighted the need to deliver it to as many people as possible.

Victorian Health Minister Martin Foley told ABC radio on Friday that the Victorian government was responsible for vaccinating 37 per of Victorians, leaving the federal government to oversee the delivery of the remaining 63 per cent, a task that will heavily rely on the nation’s GPs.