When ABC’s Triple J profiled Jacinta Nampijinpa Price almost a decade ago, she was sporting a mohawk and dark eye makeup. 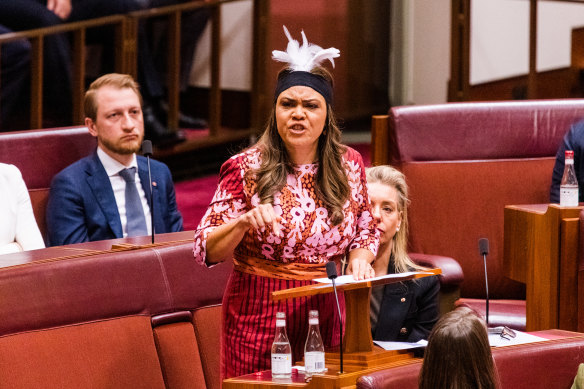 At the time, surely nobody at the national broadcaster would have predicted that within 10 years the blues, soul and folk singer would be described as a “conservative firebrand” and Sky News favourite.

When Price appeared on the ABC last week, this time on Q+A, it was as a newly minted Country Liberal senator.

Responding to an audience question, Price said she probably wouldn’t support an Indigenous Voice when there are more pressing issues facing Indigenous communities.

The prime minister has said he is confident the referendum will succeed but that he welcomes the debate. However, by referring to the Voice as amounting to “common decency”, Anthony Albanese has sought to paint its opponents as somehow lacking that quality.

What is to be done then when the opposition comes from within the Indigenous community?

Price is a Warlpiri-Celtic woman who, along with 10 other Indigenous voices, was elected to the 47th parliament, without the need for any constitutional change.

In her maiden speech, she pointed out that Indigenous Australians are not a unity ticket when it comes to supporting the Uluru Statement from the Heart.

It would be easy to dismiss Price as just a darling of right-wing commentators. 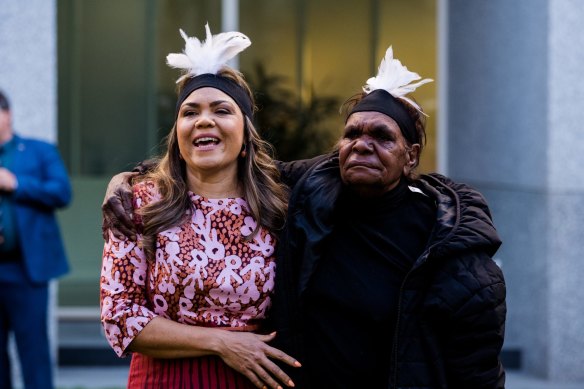 Senator Jacinta Price taking part in a traditional ceremony with her grandmother, Tess Napaljarri Ross, before delivering her first speech in the Senate.Credit:James Brickwood

It would also be foolish.

When Price says there are more pressing issues than the Voice facing Indigenous communities, she speaks from personal experience.

Price fell pregnant with her first child at 17, completing year 12 assessments while in hospital with early contractions.

As a victim of domestic violence in a subsequent relationship, Price was forced to flee her partner after he attacked her with a lamp. Soaked in blood, she ran to a neighbouring property, believing if she didn’t get away she was going to die.

Price’s aunt and nephew were both murdered, the latter the result of a family feud.

While we talk about the hardships facing Indigenous communities, she has lived them.

In a 2016 speech to the National Press Club, Price spoke of how, in many cases of brutality, she was related to both the victim and perpetrator. She said she had been encouraged to ignore the fact they had committed acts of physical and sexual violence against someone she loved.

Price came to political prominence after having the courage to expose family violence and sexual abuse in her own community and challenging the “cultural excuses” that protect perpetrators.

On her decision to speak out, she said: “I got to a point in my life where we had that many deaths in our family. We had that many women traumatised by family violence and children traumatised by family violence. And this ‘growing up yapa [Aboriginal] way’ is always like, you don’t talk about the really tough things. You pretend like they don’t exist … You’re supposed to turn a blind eye to that. And I think I got to a point where I went, ‘I’ve had enough of this’. And I became quite vocal.”

In her maiden speech, Price said the government had failed to show how a Voice would deliver practical outcomes for Indigenous people and noted in that very week that there were two clear examples of governments’ “failure to listen” to them.

The first was the recent decision in the Northern Territory to lift alcohol bans that Price says will allow “the scourge of alcoholism and the violence that accompanies it free rein, despite warnings from elders of those communities about the coming damage”.

The second was the removal of the cashless debit card that, according to Price, has allowed families to “feed their children rather than seeing their money claimed by kinship demand from alcoholics, substance abusers and gamblers in their family group”.

Having run an election scare campaign on the cashless debit card nationwide, the government had little choice but to make good on its promise to abolish it.

But it was difficult listening to Price as she rose in the Senate to talk about the consequences that will flow from that decision.

Price has been speaking to income management recipients since the first trials in 2001 and her voice choked with emotion as she shared stories of how it has improved the lives of Indigenous women and children.

She called on her parliamentary colleagues to “get out to some of these remote communities, where people – who are out of sight, out of mind to you – can’t clearly articulate to you because English is not their first language”.

She says she will bring to parliament their messages “over and over again” because “we’re trying to save lives here not toe the line of ideology”.

Whether it is the Voice, the movement to change the date of Australia Day or acknowledgements of country, Price says she has had more than her fill of being symbolically recognised.

She laments that “we spend days and weeks each year recognising Aboriginal Australia in many ways, in symbolic gestures that fail to push the needle one micro-millimetre toward improving the lives of the most marginalised in any genuine way”.

Price’s arrival in Canberra makes us question which Indigenous voices the government is prepared to listen to and how it will respond to those it finds inconvenient.

The Opinion newsletter is a weekly wrap of views that will challenge, champion and inform your own. Sign up here.