Home » Where did COVID come from? The case for a leak of a virus engineered in a Wuhan lab

Where did COVID come from? The case for a leak of a virus engineered in a Wuhan lab

Many had been sceptical about the lab leak theory, not least because Donald Trump had been suggesting it. On Wednesday, United States President Joe Biden asked American agencies to investigate this theory more closely. His move follows a shift among virologists, including former sceptics, who are increasingly coming to the view that a lab leak is most likely. 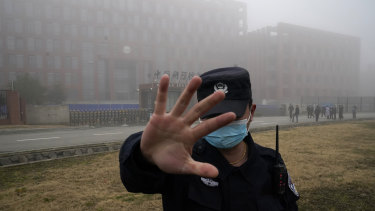 A security guard moves journalists away from the Wuhan Institute of Virology as the WHO team arrives for a field visit in February.Credit:AP

The arguments are reviewed in a recent evaluation of the evidence by a former editor of Nature and Science, Nicholas Wade, and republished in the Bulletin of the Atomic Scientists.

So what is the evidence for the lab leak theory?

First, the Wuhan Institute of Virology, led by Dr Shi Zheng-Li, had for some years been engineering bat coronaviruses, including some known to have been very close to the SARS2 virus that has now killed 3 million people. As Wade writes, “Shi set out to create novel coronaviruses with the highest possible infectivity for human cells.” The ambition, ostensibly, was to develop vaccines.

But is it just a coincidence that the pandemic broke out in Wuhan?

Shi had been taught how to genetically engineer coronaviruses to attack humans in the US, and her work was funded by the US National Institutes of Health, which is why we know so much about what she was doing.

The intermediary for Shi’s funding was Peter Daszak, who has led a vigorous global campaign to deny and ridicule the lab leak hypothesis. Yet days before the first cases of a novel coronavirus appeared in Wuhan, Daszak was bragging about the success of the Wuhan institute’s researchers in creating more than 100 new SARS-like coronaviruses capable of infecting humans.

Secondly, safety practices at the institute were lax. Although it had a BSL4 lab, the highest rating for biological safety, its protocols were not being used. Shi has admitted that much of her bat coronavirus research, including extremely hazardous experiments to enhance the infectivity of viruses, was carried out using BSL2 conditions. These involve minimal safety precautions, described by one expert as similar to those of your local dentist.

There are now credible claims that several of the institute’s researchers fell ill with severe symptoms consistent with COVID-19 some weeks before the first known cases.

Thirdly, the SARS2 virus has a certain feature, known as a furin cleavage site, that is unique to it. Its presence in the virus greatly enhances its infectivity to humans. So how did SARS2 acquire this unique feature?

Natural mutation is possible, but supporting evidence has not been found. The evidence suggesting the furin cleavage site was put there by human intervention is highly suggestive. In particular, we know from her published work that Shi had successfully been inserting furin cleavage sites into viruses to make them more infective.

Against all of this, the evidence pointing towards natural emergence of SARS2 is weak. So far, no trail of causation linking the Yunnan caves, where Shi was collecting bat coronavirus samples, to the outbreak of SARS2 in Wuhan has been found. It would need a human to be infected with SARS2 in Yunnan, who then travelled to Wuhan and spread the disease, without spreading it along the 1500-kilometre train route.

Or it would need an intermediate animal host. None has been found, unlike in the cases of the similar SARS1 and MERS viruses. In other words, writes Wade, “it’s a stretch … to get the pandemic to break out naturally outside Wuhan and then, without leaving any trace, to make its first appearance there”. A very similar case was made in February 2020 by two Chinese scientists before Beijing banned all discussion.

Until this month, the lab leak hypothesis has been suppressed in the mainstream conversation, dismissed as a “conspiracy theory”, even though no conspiracy is being alleged, other than the cover-up of data held by the Wuhan institute.

Scepticism about the lab leak theory has been based partly on a letter hastily written by a group of scientists and published in the Lancet in February 2020. They condemned “conspiracy theories”, rejected “rumours” and asserted the virus originated in wildlife. Yet the letter was drafted and organised by Daszak, the person outside China with the most to lose if the lab leak theory were proven.

Two weeks ago, the journal, Science, published a letter by 18 prominent experts calling for closer scrutiny of the lab leak theory.

Some worry that talk of a lab leak gives rise to anti-Chinese sentiment. If it does, surely the answer is better public education and policing rather than the suppression of scientific truth. Ultimately, prevention of another pandemic must come first and for that we need to know where this one came from.

Clive Hamilton is professor of public ethics at Charles Sturt University in Canberra.