WHO warns vaccinated travellers could still need to be quarantined

London: World Health Organisation scientists say that the vaccines being rolled out are extremely unlikely to eradicate COVID-19.

The warning poses particular challenges for countries who have eliminated the virus through tough border bans, enforced quarantine and lockdowns such as Australia and New Zealand.

Some of the countries with the greatest coronavirus outbreaks have begun vaccinating the public, including Britain and the United States. 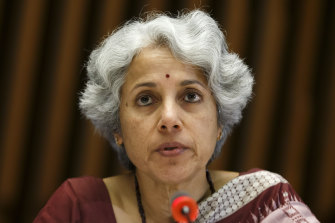 WHO's chief scientist Dr Soumya Swaminathan told a virtual press conference that there was no evidence yet that people who had been vaccinated could enter countries such as Australia without the risk of spreading the disease.

Asked by The Sydney Morning Herald and The Age what this would mean for Australia's quarantine program, Swaminathan said "I don't believe we have the evidence on any of the vaccines to be confident that it's going to prevent people from actually getting the infection and therefore being able to pass it on".

"We need to assume that people who have been vaccinated also need to take the same precautions till there's a certain level of herd immunity. This is a dynamic in an evolving field."

Australia's stated goal is to suppress all community transmission. Several states, including Victoria, which went into a harsh three-month lockdown earlier this year, have eliminated the virus, recording no new cases for consecutive weeks.

New South Wales has imposed localised restrictions as it races to curb an outbreak first detected in the week before Christmas.

The country's elimination strategy has hinged upon its tough border bans, which prevent Australians from leaving the country unless they are granted an exemption and imposes caps on the number of citizens who can return, after which they must quarantine for two weeks under guard in a hotel.

Dr Mike Ryan, director of WHO's Health Emergencies warned that COVID-19 was here to stay.

"The likely scenario is the virus will become another endemic virus, a virus will remain somewhat of a threat but a very low level threat in the context of an effective global vaccination program," Dr Ryan said.

"The existence of a vaccine, even at a high efficacy, there's no guarantee of eliminating or eradicating an infectious disease, that is a very high bar for us to be able to get over," he said.

"First and foremost we have to focus on saving lives, getting good control of this epidemic so our societies can return to normal and then we will deal with the moonshot of potentially being able to eliminate or eradicate this virus. But at this point, based on the tools and the knowledge we have, that's impossible to say at this point."

"No matter what we've done to date, it will continue to spread, despite vaccines, despite therapeutics, despite diagnostic tests," he said of the virus. "We have to learn to live with this and use the tools that we can in the best way possible."

He likened the current pandemic to smallpox and the use of the "imperfect vaccine" to control and eventually eradicate the disease.

Health Minister Greg Hunt has been contacted for comment.

END_OF_DOCUMENT_TOKEN_TO_BE_REPLACED

END_OF_DOCUMENT_TOKEN_TO_BE_REPLACED
Recent Posts
We and our partners use cookies on this site to improve our service, perform analytics, personalize advertising, measure advertising performance, and remember website preferences.Ok