Why these people still send their sons to all-boys schools

It’s all about tradition for some. For others, the scope of sporting opportunities. And then there’s the perception of academic superiority. Whatever the motivation of parents and their sons, all-boys schools survive and mostly thrive, despite being viewed by many as the cultural dinosaurs of the education system.

To experts such as Helen Proctor, who studies education through a historical prism, it’s surprising the all-boys model is still with us. 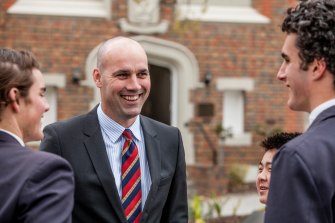 Ross Featherston, headmaster atBrighton Grammar, says he encourages his charges to have an authentic dialogue around respectful relationships.

“In the 1950s or even in the 1970s, if you had asked any education expert whether these schools would still exist – with parents wanting to send their kids in the 2010s or 2020s – they would have said ‘No. They’ll die a natural death’,” Professor Proctor says.

“But they have managed to survive.”

They have survived in the face of scandals – such as the public hammering Melbourne’s St Kevin’s has endured over abuse and misogyny scandals – and changing social and cultural mores. The schools themselves say that despite the attention focused on occasional controversies, all-boys schools are moving with the times.

St Kevin’s last year appointed its first woman, Deborah Barker, as principal. At Brighton Grammar, principal Ross Featherston says of his charges: “We also want them to be challenged to rethink masculine stereotypes and gender norms and have an authentic dialogue around respectful relationships.” 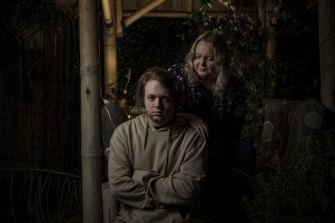 Jack Murray, with his mother, Sue, believes all-boys schools could be a breeding ground for toxic masculinity.Credit:Chris Hopkins

Jack Murray, who graduated from the single-sex Berwick Grammar two years ago, says he enjoyed his school years, but notes there were social issues including overt sexism that highlighted flaws.

“I don’t think there’s really any benefits to single-sex schools. The education would have been exactly the same had girls been there and I feel I would have been more social,” he says.

“It does seem to be a breeding ground for toxic masculinity and because they’re not being called out for doing things, they think they can get away with it. There were no girls there to say how uncomfortable and how wrong it is. Nobody really knew the consequences of those behaviours.”

Jack’s mother, Sue, says she and husband Simon did not set out to find a single-sex school, but settled on one because it seemed to offer the best fit of education and extracurricular activities for their two sons.

“It was the school I liked, not the fact that it was an all-boys school. It just needed to be the best school for my two kids.”

Simon Murray attended the then all-boys Haileybury in the 1980s. Despite some shortcomings in his own education, he found Berwick Grammar’s focus on cultural and sporting activities a good fit for his sons.

“I loved [Haileybury] … [but] on the other side of that coin was the kids who weren’t into the rah-rah culture, they tended to be loners. I had friends who were in that group and they really struggled.”

And he believes he struggled socially afterwards. “I found that I was very awkward with girls … I was a bit socially inept.”

Kelly Clemenger signed her son Oliver up at birth for Melbourne Grammar where his grandfather and great-grandfather had been educated, taking advantage of the family ties network that gives students a leg-up on admission. Oliver went to a co-ed state school in his primary years.

“I was happy that they got that co-ed experience and then went on to single-sex,” she says.

“I’m a fan of [single-sex] for those older years. I think when you’re in some of those very difficult teen years, you don’t know who you are and you’re awkward and your hormones are going crazy, I don’t mind the focus of just having a single-sex environment.” 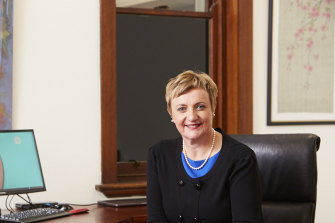 Deborah Barker has been appointed Principal of St Kevin’s College from January 1, 2021.

On the key issue of academic outcomes, separate studies by the University of Queensland, the Australian Council for Educational Research and the Grattan Institute have found it is socio-economic status rather than gender, or whether a school is state or private, that determines student performance.

Amanda Keddie, a professor of education at Deakin University, says: “The academic benefits of single-sex schooling … seem to be quite negligible. The biggest predictors of educational advantage/disadvantage are class and race, not gender. But the social issues are more complex and pronounced along gendered lines.”

This is supported by former students interviewed by The Sunday Age and The Sun-Herald.

“The rest of the world is co-ed,” says one former student, who did not want to be named. “No other part of the world is single-sex so why would you want to do that in the formative years of adolescent development when really what you’re trying to do is normalise interaction with all people?”

Associate professor Martin Crotty, who has written extensively on Australian masculinity, believes we would be better off if all-boys schools died out. “I think we’d be a lot better off without them. I think the evidence for that is the number of blokes who come through with toxic masculinity.”

“We think there is definitely is a place for single-sex schools,” he said. “As an independent boys’ school, we know that boys thrive in a culture that understands and accepts them. When boys know that they belong, they feel safe to speak with integrity, listen empathetically, connect with others respectfully and are empowered to be the best version of themselves.”

And despite what might have appeared their likely demise half a century ago, Professor Proctor says the all-boys model now appears indestructible.

“They’ve got enormous amounts of money, they seem to be able to survive any sort of scandal or series of scandals,” she says.

“I wouldn’t be surprised if people were still saying in the 2050s, ‘well, I wasn’t really happy there but my son’s going there’.”