Woman, 29, is charged with murder after man was knifed to death and three others injured at a Co-op store in south Wales

A 29-year-old woman has been charged with murder in South Wales after a man was stabbed to death and three other shoppers were injured at a Co-op store last night.

A woman identified tonight by South Wales Police as single mother Zara Anne Radcliffe, 29, has been charged with the murder of 88-year-old church warden John Rees and the attempted murder of three other people.

It was revealed earlier today that the violent incident took place while Rees’s wife Eunice, 87, who suffers from dementia, was waiting in their car nearby.

Rees was queuing up at a convenience store in Pen-y-Graig, south Wales on Tuesday for the elderly couple’s weekly shop. 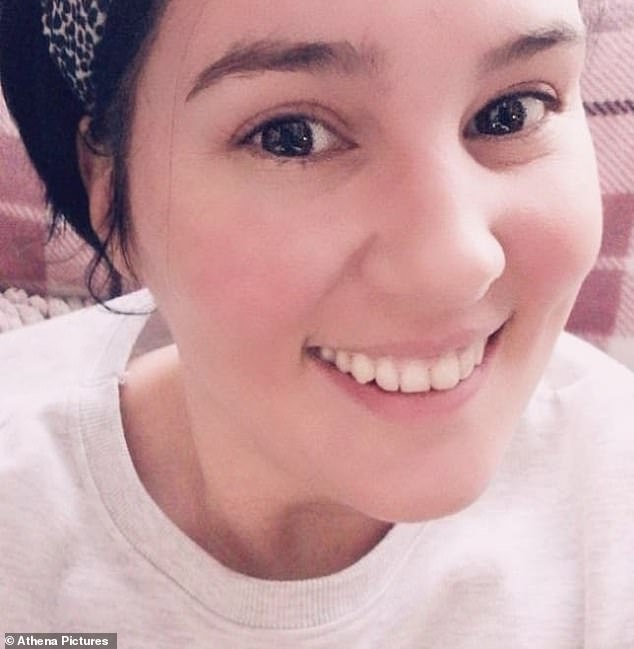 Pictured: Zara Radcliffe, 29, who has been seized by South Wales Police after an elderly man was stabbed in the throat at a Co-op

NHS nurse Lisa Way, 53, pensioner Andrew Price, 68, and a third person were treated for knife wounds after the incident at 1.45pm on Tuesday.

She is due to appear at Cardiff Magistrate’s Court later today.

A South Wales Police spokesman said: ‘We have charged a 29-year-old woman from Porth with the murder of John Rees from Trealaw and the attempted murder of three others following an incident in Penygraig in the Rhondda yesterday.

His family said in a tribute today: ‘John was the very definition of a good man, extremely respected and liked in the community.

‘He was proud of his family, proud to be a Welshman and devoted to All Saints Church. We will all miss him terribly.’

Father-of-two Mr Rees rang the bells every Thursday night at his local church in the village of Trealaw, Rhondda, in tribute to NHS workers on the front line of the coronavirus pandemic.

Friends are arranging for the bells at the village’s All Saint’s Church to be rung in Mr Rees’s honour.

The accused lives with her mother and young son in Porth, Rhondda.

A friend said: ‘It is so tragic. John was so dedicated to Eunice and they were always together.

‘She has no idea what has happened. Eunice has dementia and she can’t take it in. She keeps on saying: ‘Where’s John?’

Father-of-two Mr Rees – described as a pillar of the community – took his wife to the Co-op store in Pen-y-Graig, Rhondda, from their home a mile away in Tonypandy.

But he never returned. Police found her 15 minutes later still in the car waiting for her husband.

The family friend said: ‘He was known to everyone around here as Uncle John – he was that sort of man. He was very smart and always wore a shirt even though he was long retired.

‘He was a church warden and never had a bad word to say about anyone. He was the perfect gentleman.’

Flowers were left at the scene today as tributes continued to flood in for Mr Rees, who rang the bells at All Saints Church in the village of Trealaw at 8pm every Thursday for frontline NHS workers in the Covid-19 crisis.

However, villagers will ring the bells in his memory tomorrow night, locals said.

Vicar Rev Peter Gale described him as ‘one of the best members of the congregation.’

A note left with flowers left at the scene of the horrific attack said: ‘Our hearts go out to John and his beloved wife Unis (sic). We are all heartbroken.

‘He was such a lovely gentleman, kind and caring.’

Another read: ‘RIP. Heartbreaking losing your life in such a horrific way. Can’t stop thinking of your poor wife. Thoughts are with you and your family.’

‘John was a carer for his wife and would help anybody, he was such a gentleman.

‘He rang the church bells at the end of the street and he couldn’t wait for the church services to start up again.’

Fruit seller George Price, 69, said how Mr Rees called at the stall on his regular daily walk to All Saints.

He said: ‘You wouldn’t wish for a nicer man.’He would go to the chapel every day.

‘He would pass this stall and he would go to the shop for his newspaper. Everybody knew him. I have never known a nicer chap.’

END_OF_DOCUMENT_TOKEN_TO_BE_REPLACED

END_OF_DOCUMENT_TOKEN_TO_BE_REPLACED
Recent Posts
We and our partners use cookies on this site to improve our service, perform analytics, personalize advertising, measure advertising performance, and remember website preferences.Ok