Woman, 25, shares shocking images of her injuries after boyfriend smashed her head against wall in drunken rage that broke her nose and left her with black eyes – as he is jailed for 10 months 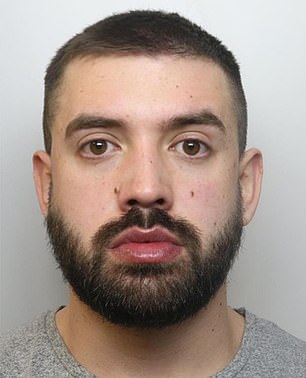 Zhanet Georgieva, 25, said Joshua James (pictured) went on a terrifying drunken rage at her house in Fivehead, outside Taunton, Somerset, in February

A woman has revealed how her ‘psychopath’ ex-partner she met on Tinder viciously assaulted her in her parents’ home after guilt-tripping her into staying there.

Zhanet Georgieva, 25, said Joshua James went on a terrifying drunken rage at her house in Fivehead, outside Taunton, Somerset, in February.

She was left with shocking injuries, including a fractured nose, facial lacerations, black eyes and other injuries following his attack.

James was sentenced on Friday at Taunton Crown Court after being charged in relation to the assault and the damage caused to Ms Georgieva’s house.

He pleaded guilty to charges of causing actual bodily harm as well as criminal damage against the property.

He was given a 10-month sentence which will run from the end of the current sentence he is serving.

He was earlier jailed for six years and eight months in April 2021 after an attack in Trowbridge town centre in September 2020. 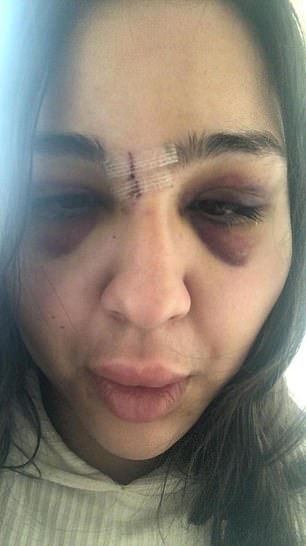 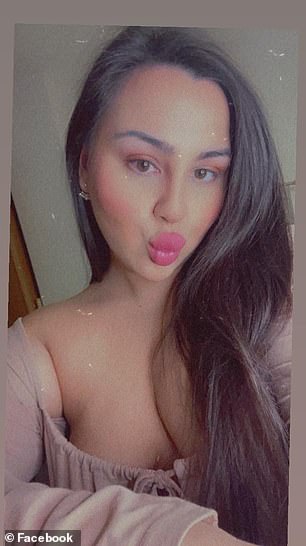 She was left with shocking injuries, including a fractured nose, facial lacerations, black eyes and other injuries following his attack (left. Right: The victim last month

Ms Georgieva said she initially met James on dating app Tinder and never suspected what he was capable of because ‘when you like someone, you go a bit blind’.

She said: ‘We met on Tinder and started speaking, he was amazing.

‘We met up, went on a few dates, and he painted himself to be this amazing boyfriend that had just got himself into a little bit of trouble.

‘I’m a well-educated woman and I don’t normally go for those kinds of boys but he just sold me a dream and sounded so amazing.

‘At that time though he was on a tag because, he told me, he’d just got into a fight with someone on a night out.

‘I didn’t think too much of it – when you like someone you go a bit blind.

‘We got talking more and more and then he had an argument with his mum, who had kicked him out, and I had to go pick him up and he asked if he could stay at my parents’ house with me.

‘Basically he manipulated me into saying he could stay, saying ‘if you don’t I’ve got other girls I can stay with’.

‘Saying it now I think, what a mug I was to take him in, but I did. He was abusive in the relationship but I didn’t realise it, it was emotional abuse.

‘I didn’t realise until I started talking to someone about it.’ 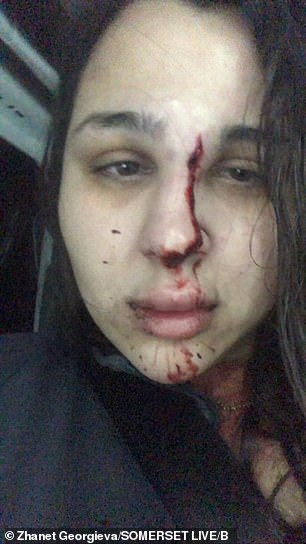 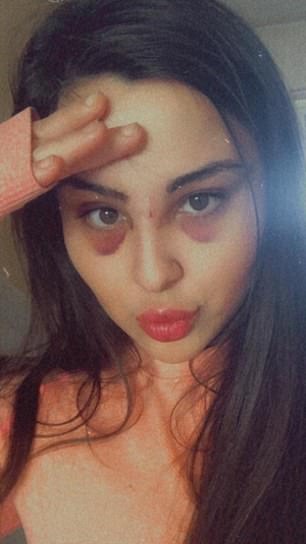 Ms Georgieva said she initially met James on dating app Tinder and never suspected what he was capable of because ‘when you like someone, you go a bit blind’. Pictured: Her injuries 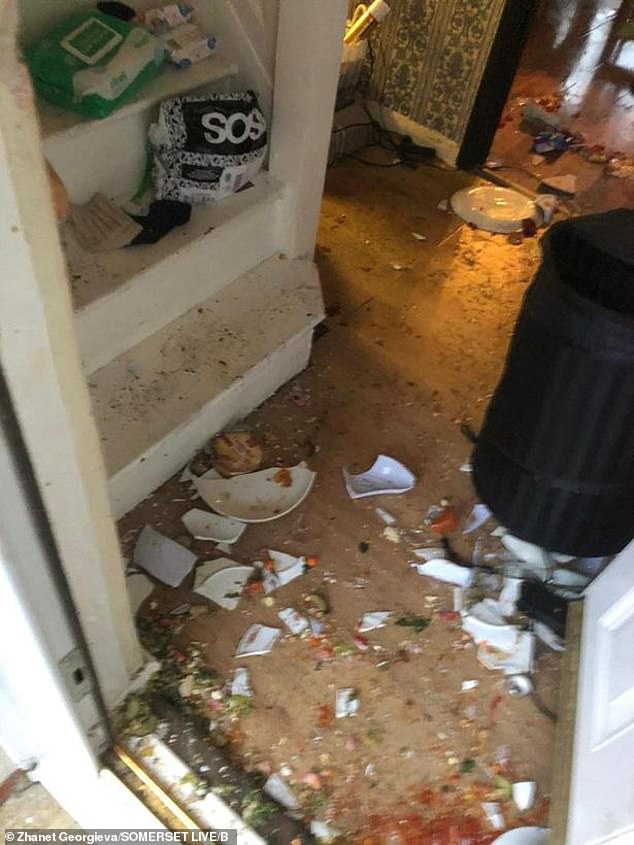 Ms Georgieva and James had a couple – who were his friends – over for dinner at her parents’ house while they were on holiday on February 21.

She said James got so drunk he lashed out at her verbally and physically despite her desperate attempts to calm him down.

She said: ‘They came over and Josh just got so drunk, to the point he would lash out at me whenever I said anything.

‘We got into an argument because I told him to calm down, that he was being like this and I was asking what was wrong.

‘I went to hug him because I hadn’t seen him like that before, it was embarrassing for me – we had these people over and he’s treating me like s**t in front of them.

‘Instead of him apologising or anything he grabbed my head and hit it against the wall.

‘I was in total shock and just ran outside to my car, freaking out and asking why he would do something like this.’ 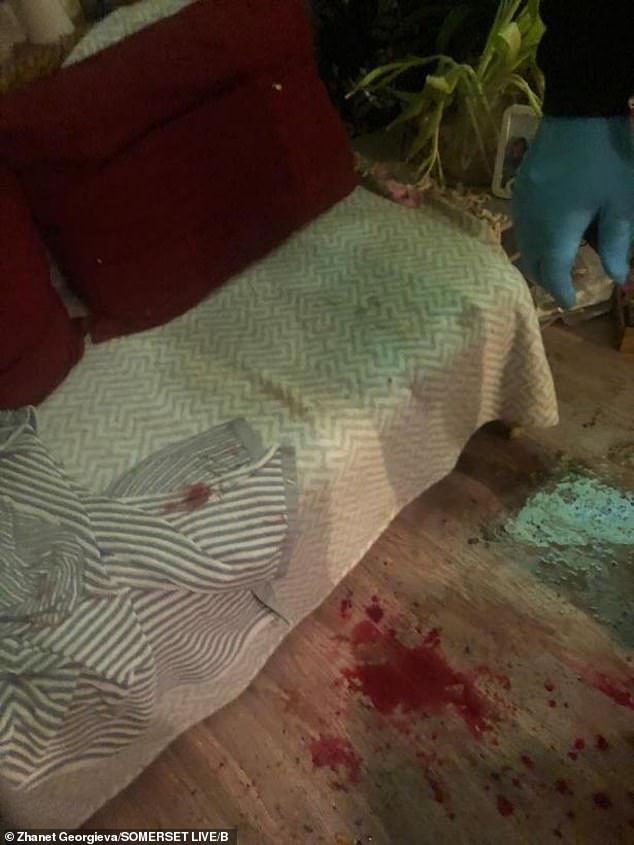 Ms Georgieva said she calmed down enough to return to the house and found James and his friend having had an argument which had left the latter with a bloody hand.

They are said to have warned Ms Georgieva to call the police before taking her out of the house.

Ms Georgieva described being left in ‘total shock’ after the attack while he continued to destroy the house before she escaped.

She said: ‘He finally let me in and there was glass, food, everything all over the place. He dragged me when I got in, put me on the sofa and started beating me up.

‘He fractured my nose, and my whole face was swollen, I had two black eyes, he hit the side of my head, my ribs, everything. I’d never been hit before so I was in total shock.

‘I tried to grab my work phone to call someone but he smashed it and my other phone and he kept on punching me the whole time.

‘As he looked away and went towards the TV, I don’t know what he was going to do, but I managed to get away and just sprinted out of the house.

‘I tried to get to the next door neighbour’s house, but next thing I remember is I was on the ground and Josh was on top of me saying ”I love you, please come back, I’m so sorry”.

‘I just listened to exactly what he said, he grabbed me and pulled me back into the house.’ 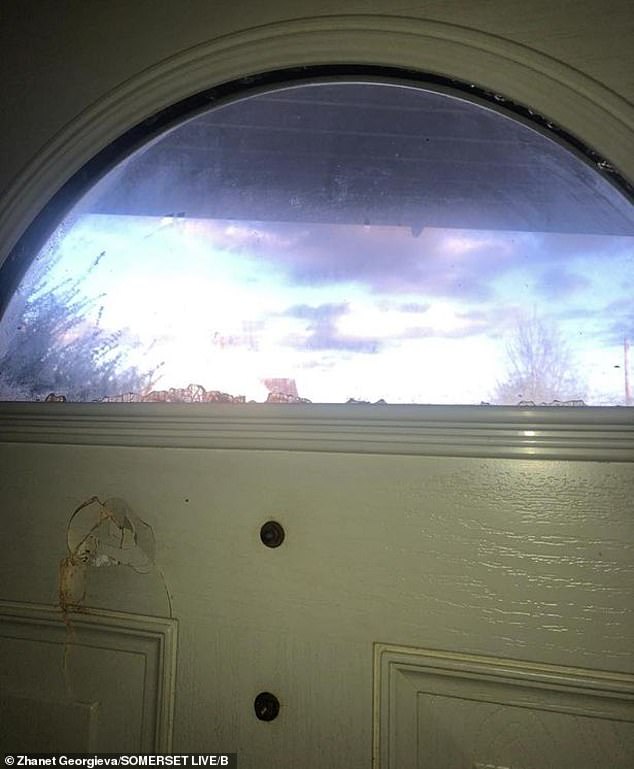 Ms Georgieva said James began to moan he was ‘going to go to prison’ because going outside at that hour would have triggered his electronic tag. Pictured: Damage in her parents’ house

Ms Georgieva said James began to moan he was ‘going to go to prison’ because going outside at that hour would have triggered his electronic tag.

She said he put her in the shower and washed the blood off her gently in what she described as acting like a ‘psychopath’.

She said he told her he loved her and to tell anyone who asks that they had been in a food fight.

But Ms Georgieva said it was at this point the police arrived, detaining James and asking her what had happened.

She initially stuck to James’ story in shock but then told the police the truth, while James was arrested.

The thug got in contact with Ms Georgieva after being taken into custody and she said he continued to manipulate her and tried to get her to drop the charges.

But she went through with them and said she wanted to raise awareness of what men like him are capable of to make sure nobody else gets hurt by them again.

She said: ‘He’s a good-looking guy, and I can see why I was fooled. I don’t want anyone else to be hurt like that.’

James was jailed, slapped with a restraining order to stop him contacting Ms Georgieva or going to her address and ordered to pay £156 in court costs.

Ms Georgieva said it was ‘very difficult’ to hear the situation relived and said she was ‘disappointed’ in the sentence, but was pleased it would extend his stay in prison.

She said: ‘I was disappointed but kind of happy the sentence will run after his current one since he thought it might run alongside – it means extra time in prison.

‘He looked so cold and had no remorse whatsoever. There was no apology for his actions. It’s been the most awful year for me but now I’m trying to turn the page.’