Women forced to wait an extra six years for their state pensions are battling to receive them amid chaos at the Department for Work and Pensions (DWP).

Delays and slip-ups mean pensioners finally entitled to the benefit have been left without any income for weeks.

And those that try to get answers on the phone have been made to wait for hours on hold.

But experts fear thousands of men and women now old enough to collect their state pensions could continue to be affected due to staff shortages and a processing logjam at the DWP. 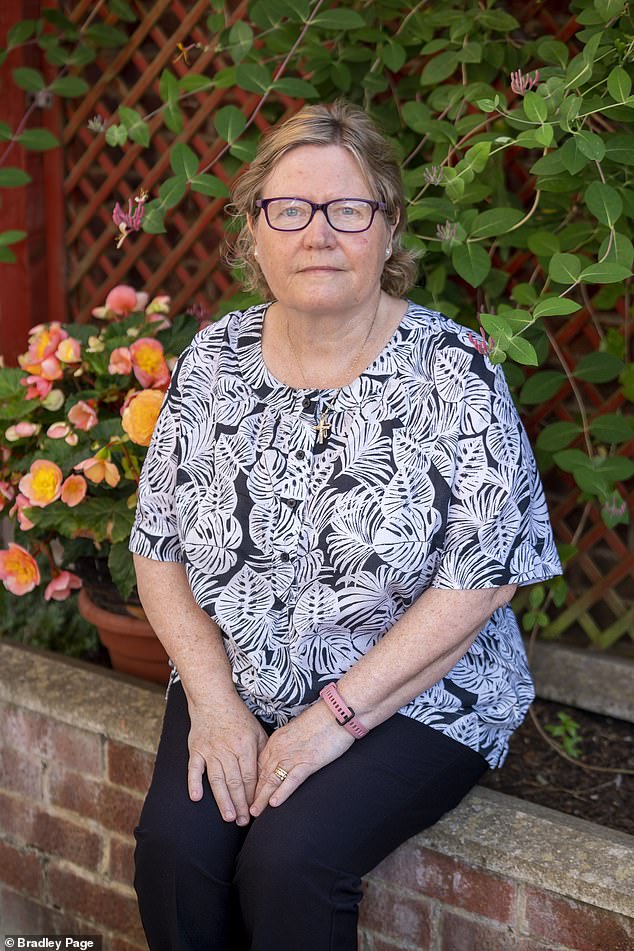 Women forced to wait an extra six years for pensions are battling to get them. Mandy Hardman (above) was forced to keep working when her retirement age was pushed up from 60 to 66

It is understood that some pensioners have been made to wait up to three months for their first payment to arrive – with some forced to keep on working.

Former pensions minister Steve Webb, a partner at consultants LCP, said: ‘We are hearing worrying reports of people not getting their state pension for many weeks after the due date.

‘Whilst some people will have other resources to tide them over, for others this could create real financial hardship.

‘The DWP needs to be open and explain the scale of the problem and what it is doing to tackle it as a matter of urgency.’

Theresa Horner, who turned 66 in July but is still waiting for her weekly £176.88, said: ‘This is not pocket money. I am a woman of a certain age and they are adding huge insult to huge injury.

‘They haven’t even bothered to tell us that our pensions are not going to arrive on time. It’s our entitlement, it’s our money they are keeping hold of.’

Mandy Hardman was forced to keep working when her retirement age was pushed up from 60 to 66.

Yet, after turning 66 seven weeks ago, the grandmother-of-four is still waiting to see her £179.60 weekly state pension.

The former admin worker, who lives in Banbury in Oxfordshire, expected her first payment in August. She gave the DWP her bank details in March but says she has now made ‘countless’ calls to the department – spending hours on hold.

‘There was nothing I could do when I found out I would have to work until I was 66 – I just had to accept it,’ Mrs Hardman said.

‘But I feel so frustrated that I am now having to deal with this as well.’

It comes weeks after the Parliamentary and Health Service Ombudsman ruled that the DWP was guilty of maladministration after millions of women were not given good enough notice of the rise in their state pension age.

The Pensions Act 1995 increased the retirement age for women in line with men to 65 and it was later raised to 66.

But the DWP did not send letters to all those affected until 2009 and some say they never received the warnings.

Those calling the new pension claim line are told that the service is dealing with a ‘higher number of calls than expected’ and they can expect to wait longer as a result.

When Money Mail called the line this week, the reporter was abruptly cut off after three minutes.

The DWP has also had to deploy hundreds of staff to fix an underpayments scandal which saw more than 100,000 women short-changed.

As part of a £2.8billion exercise, staff are trawling through records to identify and pay wives and widows whose state pensions were not automatically increased to reflect their husband’s work record.

Baroness Ros Altmann, a former pensions minister, said: ‘It’s actually very frightening that the system has not been able to keep up with foreseeable demand… For many, they have nothing other than the state pension, so what are they supposed to do?’

A spokesman for campaign group Women Against State Pension Inequality (Waspi) said that many members had reported delays and inconvenience when claiming their dues.

She added: ‘The DWP are failing to adequately deal with claimants and increasing what has already been a very stressful experience.

‘These women have been disempowered once only to find more frustration.’

The DWP has not said how many people are affected and how long they have had to wait.

But a spokesman said processing them was a ‘priority’.