Well, isn’t THAT a surprise… Women are offended by others going topless – but men are not, scientists find

Women are more offended by females who bare their breasts in public than men, a new study has suggested.

Researchers showed more than 300 men and women pictures of topless women in different scenarios and locations, asking them to rate them on levels of appropriateness, from one to 11.

The study, published in the journal of Sexuality and Culture, showed that men were on average two points more favourable to seeing bare breasts than their female counterparts.

It was no surprise to professor Colin Harbke, from Western Illinois University, that men were more amenable to seeing breasts in their daily lives.

However the expert did not expect the respondent’s sex to be the most deciding factor in whether or not they would find a photo appropriate.

‘There’s kind of a paradoxical pattern, where the data suggests that women police other women’s behaviour…and they do so by ascribing a notion of morality,’ Professor Harbke told the Times.

Describing it as odd, he added: ‘It shows just how complicated our behaviour is, when we are actually just talking about something as simple as whether or not someone is wearing a top.’ 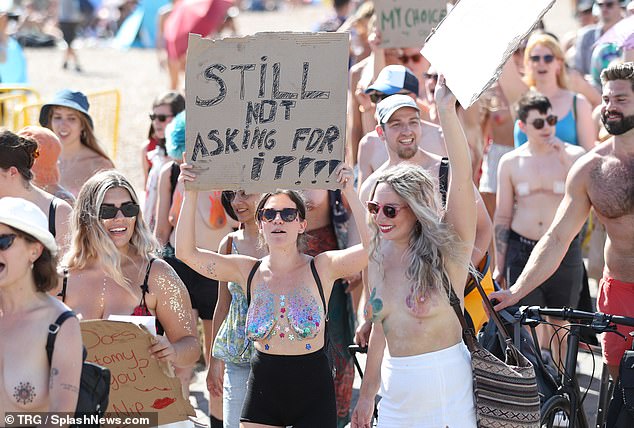 The study, published in the journal of Sexuality and Culture, showed that men were on average two points more favourable to seeing bare breasts than their female counterparts. (Pictured: Free the Nipple event in Brighton)

It comes after a ‘Free the Nipple’ march in Brighton this week saw topless men and women flock to Brighton Beach to challenge sexist double standards such as the accepted sight of topless men in public but not women.

According to The Argus, a Free the Nipple Brighton 2022 poster read: ‘Free the Nipple is a worldwide movement of people protesting the double standard of nipple censorship, body shame and unwanted sexualisation.’

But some may take the latest study to suggest that women may be pushing said double standard more than men.

However the research was part of a wider look at breastfeeding attitudes, meaning the sample might not be representative of the wider public, reports the Times.

Meanwhile, some experts theorise that centuries of a patriarchal systems have created ‘intrasexual competition’ between females – which sees them criticise or police each other because they see them as rivals for male attention.

‘Some of the patriarchal systems might help set up this competitiveness,’ explained Professor Harbke, adding that this fact did not make the findings on toplessness any less bizarre.

He added: ‘If you think of people in pretty innocuous situations, people who just happen to be on the same beach, this really shouldn’t draw anybody’s desire to create moral attributions. But for some reason we do.’ 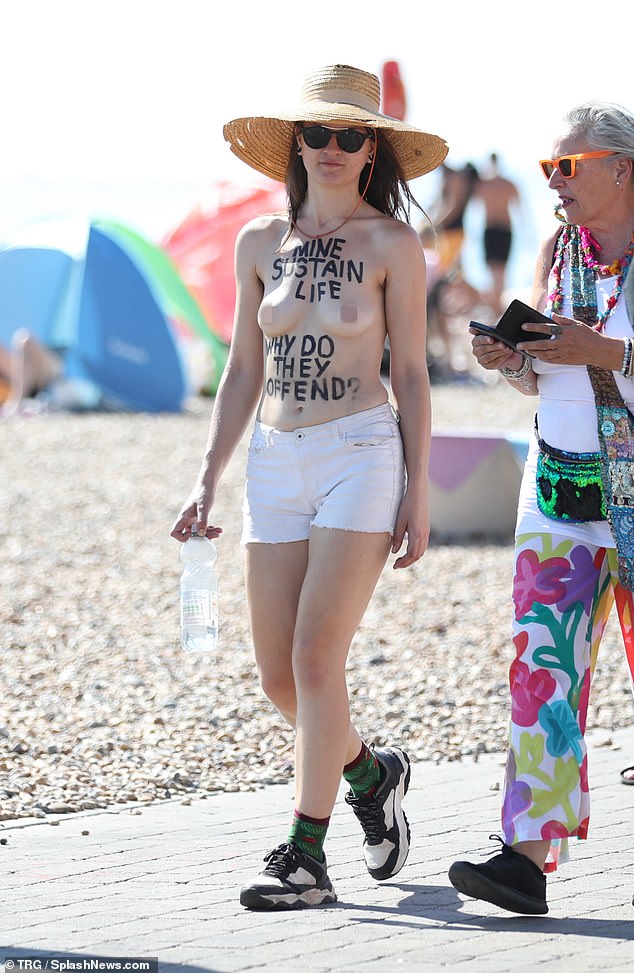 One woman had a message painted on her torso that reads, ‘Mine sustain life. Why do they offend?’ 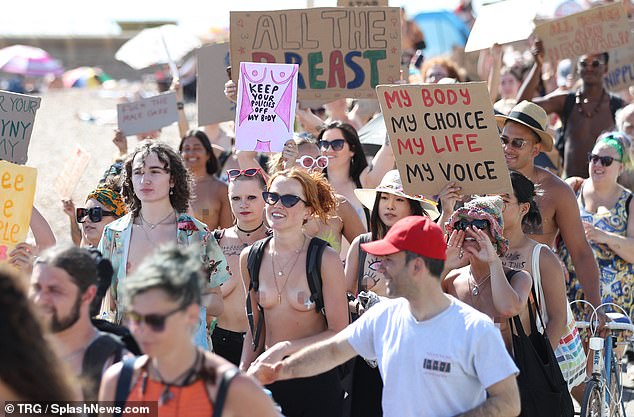 In images from the Free the Nipple event in Brighton, messages written on signs include, ‘Free the nipple’, ‘Still not asking for it!!!’, ‘Isn’t it wild that there are legal nipples and illegal nipples’, ‘Sexualised since 1999’, and ‘My body my choice my life my voice’

The Free the Nipple Brighton website describes the yearly demonstrations along the seafront as ‘designed to highlight the sexist double standards that exist in our everyday lives and challenge perceptions of bodies, breasts, nipples and gender’.

The Free the Nipple movement kicked off in 2012, with the first Brighton march taking place in 2016.

But six years later, controversial social media policies banning female nipples remain, while the sight of women’s nipples in public has not yet been normalised.

Brighton organiser Bee Nicholls told Sussex World the campaign seeks to ‘dismantle the dictatorship of the male gaze and the shame associated with the body’.

They explained: ‘The double standard of the male vs female nipple sends a message that certain bodies are inherently pornographic no matter the context; if people show “too much” breast they are sexualised and therefore not worthy of respect.

‘Free the Nipple Brighton is an opportunity to defy body shame, protest these sexist double standards and challenge unrealistic beauty ideals in all forms.’