Yale University is being sued by the US government for discriminating against Asian American and white applicants.

The lawsuit – filed by the Justice Department – comes after the same agency publicly accused Yale of discrimination, stating that Asian American students only have “one-tenth” and white students “one-fourth” the likelihood of being accepted compared to black students with similar academic results.

The Ivy League institution has replied saying the allegations are “baseless”. 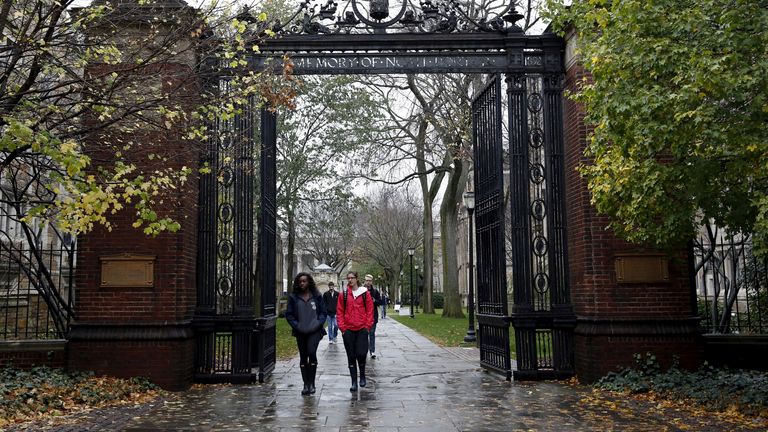 In documents filed at a Connecticut federal court, the US Justice Department claims the university “discriminates based on race and national origin in its undergraduate admissions process, and that race is the determinative factor in hundreds of admissions decisions each year”.

A statement from Yale’s president Peter Salovey said: “As our country grapples with urgent questions about race and social justice, I have never been more certain that Yale’s approach to undergraduate admissions helps us to fulfil our mission to improve the world today and for future generations.”

The investigation by the Justice Department started with a complaint in 2016 against Yale – as well as fellow Ivy League universities Brown and Dartmouth.

Officials said the inquiry found evidence that Yale uses race as a factor at multiple stages of the admissions process and “racially balances its classes”.

It is not the first time the Trump administration has been linked to action against a university for discrimination in its application system.

In 2018, the Justice Department backed a case launched against Harvard that made similar claims about prejudice against Asian Americans.

The courts have so far ruled in favour of the college in this suit – although a challenge to the decision was heard at a federal appeals court in September this year.

The US Supreme Court has ruled on more than one occasion that universities can consider the race of applicants as long as it is done so in a narrowly tailored way to promote diversity.

Educational institutes also have to show why the consideration of race is relevant.

Yale said in a statement that it complies with the Supreme Court’s precedent and that it looks at “the whole person when selecting whom to admit among the many thousands of highly qualified applicants”.

In August, the Justice Department told Yale to stop using race as an admissions factor but the university refused, according to officials.

Assistant attorney general Eric Dreiband said: “All persons who apply for admission to colleges and universities should expect and know that they will be judged by their character, talents, and achievements and not the colour of their skin.

“To do otherwise is to permit our institutions to foster stereotypes, bitterness, and division.”

END_OF_DOCUMENT_TOKEN_TO_BE_REPLACED

END_OF_DOCUMENT_TOKEN_TO_BE_REPLACED
Recent Posts
We and our partners use cookies on this site to improve our service, perform analytics, personalize advertising, measure advertising performance, and remember website preferences.Ok