President Donald Trump and Democratic nominee Joe Biden will have their microphones muted for parts of their final debate on Thursday to allow each U.S. presidential candidate a block of uninterrupted time to speak, according to the group sponsoring the debate.

The Commission on Presidential Debates, the sponsor of the televised debate in Nashville, said changes were necessary after the combative first debate between the candidates on Sept. 29.

"We realise, after discussions with both campaigns, that neither campaign may be totally satisfied with the measures announced today," the commission said in a statement. "We are comfortable that these actions strike the right balance and that they are in the interest of the American people, for whom these debates are held." 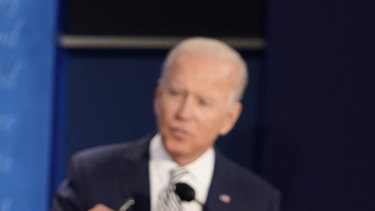 The debate organisers will give each candidate two minutes of uninterrupted time at the beginning of each segment of the debate, which will be 15 minutes each.

"The only candidate whose microphone will be open during these two-minute periods is the candidate who has the floor under the rules," the commission said.

Trump backed out of a second scheduled debate set for last Thursday over a disagreement about the virtual format following his COVID-19 infection. At that time, he raised concerns about having his microphone muted.

"You sit behind a computer and do a debate – it's ridiculous, and then they cut you off whenever they want," Trump said in an October 8 interview on Fox Business.

The organisers vowed to change the format after the first debate quickly descended into a shouting match, with moderator Fox News journalist Chris Wallace conceding the next day in an interview with The New York Times that "I never dreamt that it would go off the tracks the way it did".

On Monday, Trump's campaign said it was unhappy with the announced set of topics for Thursday's debate, arguing that it should focus more on foreign policy and complaining that the nonpartisan group was tilted toward Biden.

"The Commission's pro-Biden antics have turned the entire debate season into a fiasco," campaign manager Bill Stepien wrote in a two-page letter.

Biden's campaign said both sides previously agreed to let moderators choose the subjects. It said Trump wanted to avoid discussing his stewardship of the coronavirus pandemic, which surveys show is the top issue for voters.

"As usual, the president is more concerned with the rules of a debate than he is getting a nation in crisis the help it needs," Biden spokesman TJ Ducklo said.

Neither campaign immediately responded to a request for comment on the latest developments.

Our weekly newsletter will deliver expert analysis of the race to the White House from our US correspondent Matthew Knott. Sign up for the Herald‘s newsletter here, The Age‘s here, Brisbane Times‘ here and WAtoday‘s here.

END_OF_DOCUMENT_TOKEN_TO_BE_REPLACED

END_OF_DOCUMENT_TOKEN_TO_BE_REPLACED
Recent Posts
We and our partners use cookies on this site to improve our service, perform analytics, personalize advertising, measure advertising performance, and remember website preferences.Ok